The X-55 Devotion is one of three light machine guns (LMGs) in Titanfall 2 and Apex Legends. Its fire rate increases greatly the longer the trigger is held, though this is counterbalanced somewhat by the fact that its starting rate of fire is incredibly slow on the first few rounds, even more so than the game's semiautomatic weapons.

As such, firing this weapon in short, controlled bursts in a manner similar to the Spitfire LMG  or various other automatic weapons in the game is greatly discouraged. For maximum effectiveness, hold down the trigger as long as possible.

In Titanfall 2, the Devotion is an LMG that uses blue tracer bullets with higher speed to more easily remove targets at longer distances as well as better suppression due to the RoF that makes anyone who gets caught by it easier to remove quickly, giving it an edge over other LMGs like the Spitfire and L-STAR, which while having larger mags, do not have as fast bullets or RoF. However, the drawback is that it cannot be fired in short bursts like the two other guns mentioned, as this will cause the user to experience large amounts of recoil that will make hitting targets at range far more difficult, alongside low firerate which will make you easier to hit after firing due to it taking longer to wind up the firerate to be able to kill those who focus on you. Firerate cannot be modified to have less of a windup time before achieving the maximum RPM.

The X-55 Devotion also appears in Apex Legends as an energy weapon LMG. Its behavior is mostly the same as in previous appearances, though the weapon can be modified with attachments for improved functionality. Players can now reduce the time it takes to ramp up in max firerate with Turbocharger, unlike the first iteration. From seasons 4-5, it was a Care Package weapon. However, as of season 6 and later, the Devotion is a ground weapon like it was from season 0 to season 3. 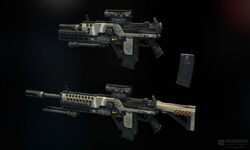 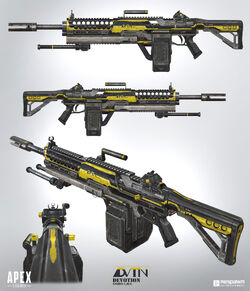