The Volt Submachine Gun (SMG), or simply the Volt, is a Pilot energy submachine gun featured in Titanfall 2 and Apex Legends. It is a weapon that fires concentrated bolts of high energy, which are referred to as 'blue tracers'.[1] Despite this making the weapon very effective In medium to close range engagements, at long range these blue tracers can very easily give your position away. The Volt appears to be equipped with a Suppressor by default, though this attachment provides no in-game benefit. The Volt is often utilised by Stalkers and Spectres.

Despite the appearance of bullet travel, the projectiles fired from this weapon are in fact hitscan. The blue tracers' travel time is merely cosmetic.

In Titanfall 2 Multiplayer mode, it is unlocked after reaching Level 27, or purchased for 100 Credits.

The Volt reappears in Apex Legends. It is still an energy actuated SMG, with its bullets having the highest velocity of all SMGs. Unlike its predecessor, the Volt now has worse hipfire accuracy and the recoil is mainly vertical. Aesthetically, the Volt gains an LED screen on the left side, showing various statuses including ammo count. 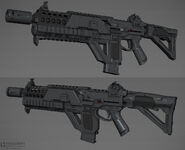 The Volt in Titanfall: Assault