Titanfall: Frontline was a game for iOS and Android devices published by Nexon and developed by Particle City, announced in late 2016, but cancelled in early 2017. The game was to be a card game revolving around decks of Burn Cards similar to Hearthstone and The Elder Scrolls: Legends.[1] Trying to access the website use to simply show a cancellation message, but no longer works. The Twitter account has also been shut down.

Many of the game's assets would go on to be repurposed for the next mobile game, Titanfall: Assault.

The gameplay was originally going to offer card-based real-time gameplay where players could call in all manner of units to play.

Concept art for the character who would become Arcadia in Titanfall: Assault.

A Stryder, Atlas and Ogre 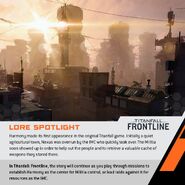 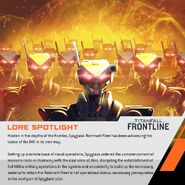 Spyglass and the Remnant Fleet

A banner advertising the game.

Various characters in the game.