Titanfall: Assault was a competitive multiplayer real-time strategy (RTS) game for iOS and Android mobile devices developed by Particle City. Set in the Titanfall universe, presumably after the events of Titanfall 2, players took on the role of a field commander as they deployed and directed a squadron of Pilots, Titans and other assets against rival commanders on various small-scale battlefields across the Frontier. The game was announced in May 2017[1] and was released globally on August 10, 2017.

The game was announced to be ending ongoing support on June 29, 2018, with server shutdown on July 30, 2018.[2] The following message was posted on Titanfall: Assault social media to coincide with the shutdown:

Join the fight for The Frontier in this fast and fluid real-time strategy game. Combine towering Titans and agile Pilots to build an unstoppable force.

Put your skills to the test as you assemble the ultimate deck of Pilots and Titans paired into heroic duos. Collect and upgrade dozens of cards including tactical Burn Cards providing powerful battlefield support. Strategize your way to victory over enemy forces in epic PvP battles and compete for glory and rewards on the leaderboards. Combine and conquer. Unite and destroy. And lead your forces to victory in The Frontier War.[3]

Matches of Titanfall: Assault were conducted in real time, live against other players. They took place in a variant of the Hardpoint Domination gamemode of the original Titanfall, with the central objective being the capture and holding of three Hardpoints situated on the map. Capturing a neutral Hardpoint or neutralizing an enemy Hardpoint with any friendly unit would take roughly five seconds, holding a Hardpoint would give players one score approximately every four seconds, and victory was achieved when a player reached one hundred (100) points. Alternatively, players could instantly win a match by pushing forward into the enemy base and destroying the Heavy Turret situated there.

Players could also play against a variety of AI-controlled Commanders, if they wished to practice new strategies and decks in an offline environment and against assorted tactics. The game provided a beginner's tutorial on the game's overall mechanics and additional advanced tutorials for topics such as squad management and specific maps.

The Squad, or "Dropship," was the collection of Pilots, Titans and Burn Cards that a player took into battle. A Squad must contain three Pilots, three Titans and four Burn Cards, and a commander could have a maximum of three pre-designed Squads at any time. Each card had its own cost (the amount of in-game supply required to deploy that card onto the field) as well as its own level that dictated overall strength. Collecting duplicate cards counted as experience points for those units, and an additional payment of Credits was required to level up a card. Players must wisely consider the costs, strength and utility of their units when designing their Squad and their overall strategy for a battle. It should be noted that you could not see the specifics of an enemy commander's Squad until after a match ends.

Pilots typically served as the primary units that could be employed by the player; every Pilot had a unique specialty or behavior, and most would automatically move to capture or contest enemy Hardpoints and push the objective. Titans served as heavy troops that can only be deployed after the one minute mark; while they could not capture Hardpoints themselves, they were powerful units and had varied roles and behaviors similar to Pilots. Burn Card support could vary from infantry squads and turrets to orbital strikes and supply depots.

Matches in Titanfall: Assault took place across a small assortment of maps, most of which were based on previous locations presented in Titanfall and Titanfall 2. Each map had its own layout, and most maps had one or two specific mechanics or features that had to be taken into consideration. Maps were chosen randomly at the beginning of every match.

Titanfall: Assault featured a level-up system based on how many matches were won by the player. During matches, players could earn Trophies, with the player's total Trophy count determining where they were placed in the rank system. The rank system was divided into Bronze, Silver, Gold and Titanium tiers, with each tier having three sub-ranks from I to III. Ranking up would unlock new cards for acquisition.

Ranking beyond Titanium III would place the player in a seasonal bracket, with two ranks War Hero and Legend available. At the end of a season, the player would be reset back to the beginning of their rank (6200 or 7200 Trophies, respectively) and given a Season End Cache, but all other ranks (Bronze-Titanium) were kept.

A separate levelling system of XP also existed in game to unlock separate features such as new maps and social features, as well as dictate the maximum level that cards in a player's collection could level up to.

The game also featured a system of Guilds, similar to Titanfall 2's Networks, unlocked at Level 3. Guilds could have an emblem (With a wide selection based on Titan Insignias and Banners of previous games), alongside private or public settings, location and a required trophy count to join. The game also featured a messaging and chat system, and a "Replays" feature, that allowed players to record and watch their matches over again.

Guilds could also complete Guild Missions, an ongoing narrative that told the story of the conflict around the gas giant Kraken.

Several Burn Cards, such as one allowing the use of Plasma Drones, were hinted at. The official Titanfall: Assault Facebook page also ran a vote, for community feedback on whether Jack Cooper and BT-7274 or Kuben Blisk and his Legion Titan should be added to the game next,[4] though only Jack Cooper and BT-7274 were implemented before the game's cancellation, on September 20, 2017 as part of the version 2.0.0 patch. Other new units added in post-launch support included Ash, Core Ronin, Arc Drones, Cloak Drone, Stalkers, Reaper Bruiser, Amp Field and Time Field. In addition, two new maps; Colony and Boomtown have been added.

Although ultimately never implemented in-game, renders for unreleased content have been seen uploaded online by Particle City developers. These include renders of Tone[5] and the 40mm Tracker Cannon,[6] Legion's Predator Cannon[7] and others.

As of June 29, 2018, ongoing development of the game has ceased, with all in-game microtransactions being disabled until the server shut-off date on July 30.[2] 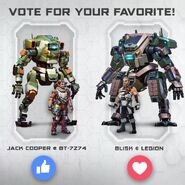 Poll for Jack Cooper and BT-7274 or Blisk and Legion 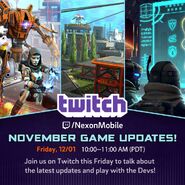 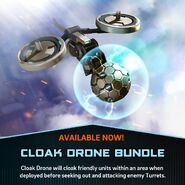 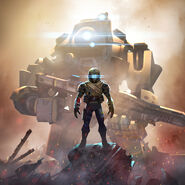