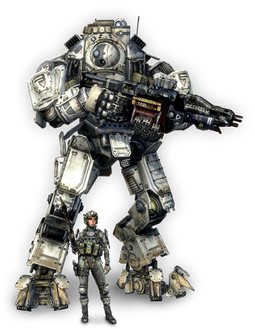 Titans are mech-style robots, descended from modern-day fledgling military exoskeletons, designed for both civilian and military applications. They serve as an important element in the universe of Titanfall, even being the namesake for the series.

Titans are used for a variety of tasks throughout the Titanfall Universe. Unarmed variants, such as the Journeyman, can be fielded in a variety of roles such as agriculture, logistics, shipping and salvage, deep space search and rescue, cargo transport and construction.[1][2] The Reserve models of the Atlas, Ogre and Stryder additionally appear to be civilian model Titans fitted with improvised equipment, while the "Emergency Responder" Warpaint implies that the Scorch-class Titan may have some use in Firefighting roles, due to its fire-resistant plating.

However, the chief application for the Titan platform and the role that made it famous is that of combat, providing heavy fire support equivalent to that found on a main battle tank.

Most Titans are typically deployed into battle via the process of a "Titanfall". This involves the Titan being launched out of a starship hangar bay at hyper-sonic velocities in a manner similar to a Drop Pod. This deployment method is extremely precise and allows the Titan to arrive on the ground in under a minute.

While on a starship, Titans are constructed on-site from parts on the ship before being ready to drop. This process can take under five minutes to assemble the Titan from pre-existing parts.

Once a battle is concluded, the IMC is known to utilise the Widow transport craft to help transport Titans back into orbit, ready for re-deployment.

It requires extensive training to effectively operate a Titan, especially in combat. Titan Pilots are rated by "certifications", most of which apply to civilian applications. The most prestigious certification is the Full Combat Certification - a widely-published series of tests that grade a Titan Pilot's abilities. Because of the extreme physical and mental challenges of mastering both Titan combat and dismounted parkour movement, a fully combat certified Titan Pilot is a rare find, and the combat skills of active Pilots in the field varies wildly throughout The Frontier. Pilots are also known to become very attached to their Titans, for instance, Jack Cooper and BT-7274, as they both rely upon each other to fight and survive effectively. It is also not uncommon for Pilots to personalise their Titan chassis with Nose Art, Paint Jobs and Insignias alongside custom modifications and equipment. Despite this, the IMC considers its Titans and Pilots to be interchangeable and disposable where the Militia views each of its new Vanguard Pilot-Titan units as a long-term investment. As a result, an experienced Vanguard Titan-Pilot team is far more flexible and deadlier than any single IMC Titan and Pilot on the Frontier.[3]

There are several variants of Titan employed throughout The Frontier. All currently employed variants, with the exception of the Vanguard and Monarch, are based on the Atlas, Ogre and Stryder-Class Titans.

Prior to the Battle of Demeter, Titans had highly customisable loadouts and flexible designs, based on Pilot preference. This is likely due to the increased availability and lower costs for construction while supply lines to the Core Systems were intact. Those variants employed after the destruction of the Demeter gateway (See below) are much more specialised and less flexible in their roles.

In the wake of the Battle of Demeter, Titan variants have become much more rigid in their deployment and structure, likely due to resource and material shortages incurred by the loss of many vital IMC robotics factories. These variants do not possess recharging energy shields and have one less dash available to them than their Pre-Demeter counterparts (With the exception of Ogre titans). Their loadouts are also static, likely to make mass production and field repair of standard components easier and less resource-intensive.

Aegis Ranks are specialised upgrades for the post-Demeter era Titans, allowing major upgrades to a Titan's weaponry, abilities and defenses. These can range from upgrading the T-203 Thermite Launcher to hold three grenades at once to upgrading the armour and shields of a Titan. They are mainly employed by mercenaries working for the various factions, as specialist modifications not practical for mass-deployment.

Prime Titans are additionally modified versions of the six Titan chassis' employed in the Post-Demeter era. It is currently unknown what practical upgrades they offer compared to their basic counterparts. Gameplay-wise, they do not differ from their regular variants. It may be possible that Prime Titans may be able to use their core more as shown in the terminations (executions).

Titanfall: Assault introduces several variants of Titans from the first and second game, each one which feature different loadouts and abilities to use in the battlefield, they are;

Traditionally, all Titans have been designed by Hammond Robotics (and other IMC subsidiaries), and have thus not been available for purchase by the Militia. Instead, they have typically resorted to raiding and stealing from IMC garrisons, purchasing Titans from the Black Market and building them out of Titan Salvage.

However, in the wake of Demeter, the Militia have now designed their own Titan; the Vanguard-Class. Unlike the six chassis' mentioned above, the Vanguard reflects the Militia's philosophy of respecting their Pilots and keeping them allied. As such, their Vanguard has more design features reminiscent of the original three designs - notably the Atlas. Where the IMC considers Titans expendable military hardware, the Militia considers them a valuable soldier just like any other Pilot or Rifleman.[3] Vanguard-Class Titans also house an on-board AI capable of learning, adapting, emotion and setting personal goals; contrast this with the rigid, static Titan OS employed on IMC-designed Titans, which rarely shows initiative beyond what can be achieved with a Spectre or Reaper.

Concept art of a Titan being manufactured,