Ticks[1] are an autonomous anti-personnel robotic weapon first appearing in Titanfall 2 as an ordnance in singleplayer and as a boost in multiplayer.

Ticks vary in appearance. Ticks that are encountered in the campaign have balloon-like heads which are made up of red hexagons, perforated with recessed dot-like lights. In multiplayer, ticks' heads are six-sided, in the rough shape of a triangular prism, and painted more red over the rest of their bodies.

Ticks make another appearance in Apex Legends, albeit in the more benign Loot Tick form.

In the Titanfall 2 campaign, Ticks appear as supporting forces alongside other IMC troops. During the mission Blood and Rust, Ticks will be airdropped into a large pump regulation chamber via Goblin. Like Plasma Drones, Ticks can be deployed by a Specialist, and can also be deployed en-masse by a Reaper. Ticks can occasionally be found in the missions as Ordnance, with four refillable charges.

Ticks in Titanfall 2 multiplayer are equipable as a Boost, unlocked by default and can be activated at 65% Core meter. When activated, the Tick will not replace your Ordinance but does have two charges available.

In Frontier Defense, Ticks can both be deployed from Drop Pods and by Reapers - as in the campaign.

Concept art of the Tick 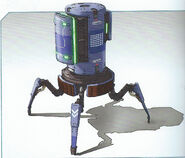