The 6-4 is a faction in Titanfall 2. Members of the faction appear in the campaign mission The Ark. The faction is playable in multiplayer, and Gates is the announcer.

Comprised of freelance pilots, The 6-4 operates on a code unique among bounty hunters. Instead of selling their services to the highest bidder, Frontier freedom, on their terms, is a higher priority.

The 6-4's history prior to the Battle of Typhon is unknown. During the engagement, however, the 6-4 made their debut during the later stages of the battle following the reactivation of an IMC Interstellar Beacon by Jack Cooper. As part of Blackbird Squadron, given callsign Blackbird 6-4, they assisted Marauder Corps forces in chasing down and boarding the IMS Draconis, in an effort to secure the Ark.

During the air battle, the 6-4 would assist Pilot Cooper in taking control of the IMS Malta. They helped Cooper clear the infantry surrounding the ship's anti air guns, then joined him on the ship to clear its main hangar and bridge. After the Malta changed course, they provided cover fire during Cooper's battle with Viper. The 6-4 would keep control of the IMC battleship, and eventually proceed to utilise the Malta to prevent Cooper from being surrounded by IMC forces during his confrontation with Slone. The 6-4 were able to escape Typhon prior to its destruction at the hands of the IMC superweapon.

Sometime following the Battle of Typhon, members Droz and Davis left the 6-4 for presently unknown reasons, forming The Last Resort.

"The six-four is a family, and we'll kick your arse!" 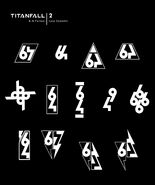 the 6-4 in their Crow dropship
Community content is available under CC-BY-SA unless otherwise noted.
Advertisement