The Stryder is a Titan chassis developed and manufactured by Hammond Robotics. Developed as an extremely mobile and maneuverable Titan variant, the Stryder's almost skeletal design has been optimized for superior speed and agility. Significant improvements have been made to its Dash Core, enabling it to use it more frequently, while the Titan can also sprint for greater distances, making it perfect for hit-and-run attacks, ambushes and rapid redeployments. Unfortunately, this speed comes at a price. The Stryder's design is stripped down compared to other Titan variants, and its armor is largely non-existent, making it much more fragile in combat. In Titan-vs-Titan engagements, Stryder Pilots must use all available cover and their machine's impressive speed to outflank and evade their heavier adversaries, as they are unlikely to survive a straight-up slugfest.

During Hammond Robotics' final testing phase of the Stryder, the testing grounds came under attack by an M-COR strike force, including a pair of Atlas-class Titans. Despite the valiant efforts of the test Pilot, the prototype Stryder was eventually brought down, presumably allowing the M-COR troops to study the wreckage and eventually wield Stryders of their own. When ready, activating the Stryder`s 'Dash-Core' ability allows for unlimited dashes temporarily, making the Stryder a highly mobile force on the battlefield.

The Stryder class is unlocked by completing either the IMC Campaign or Militia Campaign in any order.[1]

The stats for the Stryder Titan are below, they’re best viewed on a relative scale to the other Titan Chassis. The stats ranking is displayed in parenthesis next to the stat. (Source)

The Stryder is an agile and nimble Titan, favouring speed and mobility over the other Titans, as such, large open maps are where it excels. Long range weapons such as the Plasma Railgun or 40mm Cannon are an ideal fit for this class, maximizing ranged damage while avoiding close range engagements, as the Stryder is unlikely to survive close ranged engagements with the other Titans. If one is forced in to a one-on-one battle with other Titans, it is best to use the Dash Core ability to avoid direct hits.

The Stryder serves best as Recon/Assault units. A Stryder's speed and agility allow it to quickly move in on an enemy area in order to observe enemy fortifications and then get out before it can be destroyed. As an assault unit, the Stryder should be the first ones to head into a battle. They should grab the enemy Flag or claim a Hardpoint before the enemy can respond and then fall back behind cover fire from friendly Atlas units.

The Stryder's main weakness is that it gets its formidible speed and agility by trading for armor and shields. 3 shots from a 40mm Cannon hitting the critical spot will doom you. Therefore, if your shield is down, it's recommended to use the Vortex Shield to catch incoming fire or dash away to cover to recover your shields. The Stryder's Dash Core should be saved so as to allow a Stryder to quickly escape a firefight. Slower projectiles such as those from the Quad Rocket and Plasma Railgun should be dodged using the dash ability.

The Stryder chassis does not make a direct appearance in Titanfall 2, though two Stryder-derived chassis are available to pilot: Ronin and Northstar.

The Stryder makes an appearance in Titanfall Online, alongside the Stryder Tier 2. One of these Titans, a Stryder Tier 2 christened the "Black Mamba", is piloted by the Pilot assassin Rin.

The Stryder makes an appearance in Titanfall: Assault, as a deployable Burn Card equipped with an XOTBR-16 Chaingun.

Strategically, the Stryder excels as an anti-infantry Titan that still does notable damage to enemy Titans and emplacements. If a team of enemy Pilots and infantry masses atop a Hardpoint, you can Titanfall a Stryder atop their heads and clear them out quickly. It's not as beefy compared to its Atlas and Ogre bretheren, so try to back it up with friendly Pilots and Titans when it comes to big brawls.

The Stryder has two variants:

A turnaround reference of the Stryder. 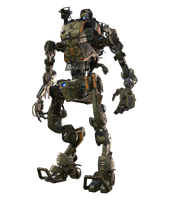 Schematics of the Stryder.

The Stryder as seen in the Frontier's Edge art. 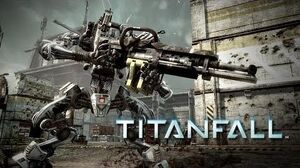