Stim is a Pilot Tactical Ability that appears in Titanfall and Titanfall 2. It allows for a temporary boost to Pilot speed. It also doubles the pilot's health regeneration. This ability is handy for those pilots who like to traverse the map quickly or find themselves injured often. In the games’ sequel, Apex Legends, there is a Legend called Octane, who’s Tactical Ability is a Stim, which currently in Season 9, takes away 25 health from the player however makes the player move faster a short moment, similar to Stim in Titanfall and Titanfall 2.

There is also an execution that involves it, Late Hit.

HUD representation of the Stim ability 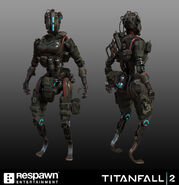