The Splitter Rifle (Otherwise known as the Titan Particle Accelerator or TPAR)is a Titan fully-automatic energy rifle that appears in Titanfall 2.[1]

A cyclic particle accelerator (cyclac), the Titan Particle Accelerator (TPAR) is a heavy energy-based weapon with the purpose of punching through shield technology and vaporizing the materiel/ personnel it is protecting. Its charge state determines the amount of kinetic power delivered. When fully charged, the weapon can deliver a crippling burst of energy. It can also fire smaller, less charged bursts at a very high rate of fire.

Stage one of the firing sequence consists of the oscillating field generator (OFG) accelerating particles and spinning them to just below the speed of light. In stage two, the OFG maintains the speed of these supercharged particles as the electromagnetic barrel creates a field path directly linked to the TPAR's targeting system. By this time, the weapon is at a volatile state, in which the distinct whirring of the fully charged OFG is a telltale sign for enemies to evade or brace for critical damage. Stage three is when the OFG opens and releases a massive salvo of highly charged particles. The TPAR's power source is a series of high capacity batteries that must be replaced often as the weapon requires very high amounts of energy to operate. A highly skilled Titan Pilot can prove this to be a very devastating weapon on the battlefield.

The Splitter Rifle is a rapid single-fire energy rifle with the ability to leverage the Ion's central energy system to fire 3 deadly shots at once. It is the primary weapon used by the Titan class Ion. This weapon is a particle accelerator, firing charged particles to disrupt the atomic structure of its target, causing a fairly high amount of kinetic and heat damage to the target. This is somewhat different from the rest of Ion's abilities, which utilizes lasers for other ranged attacks such as laser shot, laser core and trip mines, to a certain degree. This utilization of charged particles could be where Ion gets its name.

The Refraction Lens, added in Angel City's Most Wanted, is an upgrade to the weapon that changes the ADS function to fire five shots, as opposed to the default three. The Entangled Energy upgrade, on the other hand, allows Ion to recharge her energy by scoring critical hits on Titans with the rifle.

The Aegis Upgrade available in Frontier Defense, Split Shot Power, can additionally bolster the Splitter Rifle's power by upgrading both the efficiency and damage of the weapon, allowing it to fire more shots and deal more damage-per-shot.

What appears to be an unnamed modification to the Splitter Rifle appears in Titanfall: Assault in the hands of the Sniper Ion. It requires a short charge before firing, similar to the PR-01 Plasma Railgun.

Concept Art for the rifle.

First-person view of the weapon.

Sniper Ion holding the Sniper modification of the Splitter Rifle. 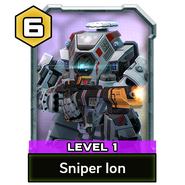 Another view of the weapon.

Hi-Poly render of the weapon.