The Spitfire LMG has high recoil at first, but it eventually stabilizes into a tighter firing pattern. Due to its unique recoil, players are advised to ignore the traditional method of firing in short bursts, and rather fire in long bursts for increased effectiveness. It boasts extremely high damage for a non-long-range weapon, downing a pilot in no more than 3 shots or 2 headshots. It is one of the most useful guns to use when rodeoing a Titan, as it takes less than one belt to fully destroy it, also the Slammer attachment allowing it to do 50% more rodeo damage.

The Spitfire LMG is very unique to the other weapons. It starts out with a very high recoil, which is reduced by 15% every 1/9 of a second, or every shot, until you reach minimum recoil in 15 shots.

The Spitfire MK2 is a Pilot anti-personnel fully automatic light machine gun that appears in Titanfall 2.

The Spitfire MK2 is an improvement over the MK1 in accuracy, stability, and overall weight. Internal components have been improved to allow its internal recoil dampening system to adjust for the operator's rate of fire.

The addition of lighter furniture composite materials increase the mobility and versatility of this LMG. A longer attachment rail system has been implemented to stabilize the barrel during sustained fire.

The reciprocating charging handle has been replaced with a non-reciprocating oversized knob, allowing operators to effectively cycle the action with less effort.

The Spitfire is a fully-automatic light machine gun with a steady fire rate and can be considered the LMG class' equivalent to the R-201, as it is generally easy to use and has none of the quirks present in its counterparts. It performs at 50 damage, 39 accuracy, and a range 75 range.

Its magazine can hold 80 bullets and 96 with the Extra Ammo mod equipped. It has also been stripped of its recoil pattern, no longer becoming more accurate the longer it's fired.

Additionally, the changes made to Rodeo renders the weapon useless in an Anti-Titan role, as the player now pulls a Battery from/drops a Frag into the Titan without any firearms involved. While both Amped Weapons and A-Wall can enhance its effectiveness, one still needs to aim for the weak spots (the cockpit) of a Titan to actually do damage, as with other non Anti-Titan weapons.

The M600 Spitfire LMG (or Spitfire for short) is an anti-personnel fully automatic light machine gun (LMG) introduced in Apex Legends. Available to competitors in the Apex Games, it is the next-generation Spitfire LMG, descended from its Frontier War forebears, the Spitfire MK1 and MK2.

Designed by Siwhan Industries, the new Spitfire appears to borrow from both of its ancestors in its design. Still a box-fed LMG designed to be carried around by infantry, the newest iteration of the Spitfire reverted back to the old gas operated, rotating bolt locking mechanism of the MK1 but retained the light composite frame and the non-reciprocating knob from the MK2. The overall recoil is the same as the MK1 but boasts better initial accuracy, and much lower initial recoil. It's still designed for sustained suppressive fire.

As of Emergence, the Spitfire can only be found in the Care Package, alongside the Kraber-AP Sniper, Alternator and Scout. As it is a Crate Weapon, its ammo cannot be found on the ground, and cannot be refilled from using the ammunition of another Spitfire. Once it runs out of ammunition, the weapon is rendered useless and should be disposed.

As of Emergence, all of these attachments will come built in, and aside from optics will be at the highest tier possible.

High-res render of the Spitfire in Titanfall

The Spitfire, on a weapon rack in The Pilot's Gauntlet 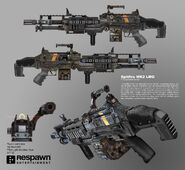 Initial concept for the MK2 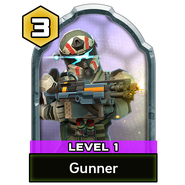 The Spitfire in the hands of the Gunner, in Titanfall: Assault.