Specialists[1] are enemies that first appear in Titanfall 2's campaign, employed by the Interstellar Manufacturing Corporation. They are Simulacra, taking a similar form to that of a Phase Shift Pilot - though it is not known whether they actually operate Titans.

Utilized primarily as reconnaissance units, Specialists are often deployed alongside infantry squads but can also operate independently. They are seen armed with Volts, Mastiffs or Mag Launchers. Unlike grunts, Specialists aren’t frontline combat units. Instead, they often stay to the rear where they can safely deploy drones and ticks. Drones give Specialists a better view of the battlefield, allowing them to provide real-time intel to command. Each drone is equipped with a plasma- or laser-based weapon system, ideal for engaging enemy Pilots and infantry. Once enemies have been detected, specialists can also deploy Ticks.[1] 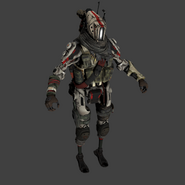