The Sniper Spectre is identified by a flat black paint job with red trim, use of the Longbow-DMR Sniper & Charge Rifle for anti-Titan attacks, alongside the ability to cloak which - like the Tactical Ability available to Pilots - is very effective against Titan optics but much less so against Pilots, especially at close range. Sniper Spectres have quite a high degree of accuracy and seem especially adept at hitting moving targets, which when combined with their cloaking ability and propensity to quickly shift their firing positions can make them a nuisance to dispatch. However, their threat level versus the Harvester is relatively low due to their low damage output; they are, however, extremely effective at taking out placed Light Turrets. 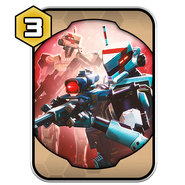