The Smart Pistol MK6 is a Pilot anti-personnel pistol that appears in Titanfall 2 to replace the older Smart Pistol MK5.[1] The pistol is no longer a loadout weapon, instead being available to use as a Boost. When activated, the Smart Pistol replaces your secondary for the remainder of that life.

The next generation in AI targeting technology comes in the form of the Lastimosa Armory Smart Pistol MK6. Upgrades from the MK5 include a reciprocating charging handle, frame integrated ammo counter, multi-function Laser Aiming Module (LAM), improved ergonomics, an integrated stand-off muzzle, as well as improvements to the targeting capabilities. The SP MK6 is the choice of deep cover operatives, most infamously used by the Advocates in clandestine assassination operations.[2]

As a Boost, the Smart Pistol is a one-use powerup that can be activated at 60% of the player's Titan meter. Unlike every other weapon, (besides Secondary Anti-Titan weapons) the Smart Pistol only has one spare magazine, for a total of 24 rounds. The lock-on speed is now governed by both distance from the target, and distance between the target and the center of the lock-on reticle. The Smart Pistol now alerts the target that they are being locked-onto, making it easier to evade. Unlike its previous incarnation, the Smart Pistol loses its free-fire mode, thus the weapon will attempt to lock-on to targets regardless of whether or not the player is aiming down the sights.

As of Operation Frontier Shield, the Smart Pistol can no longer lock on to Cloaked targets.

The MK6 appears in the final mission of the campaign, as a part of the SERE Kit. 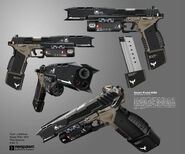