The Smart Pistol MK5 is an automatic lock-on target primary handgun. In close range, the weapon will lock-on to the enemies head and chest. It takes 3 locked-on hits to kill a Pilot, 2 for Spectres, and will instantly kill Grunts. The Smart Pistol also takes a longer time to lock onto actual enemy Pilots than AIs, making it an excellent weapon for "crowd control" of AIs, but not for PvP combat. The Smart Pistol will also lock-on to ordnance, like Grenades and Arc Mines. You can only have 5 locks at a time.

The Smart Pistol has a unique damage system, and always does 67 damage (50 when not locked-on) against Pilots, 100 against Grunts (instant kill), and 101 damage against Spectres; there is no headshot multiplier or range drop.

When using iron sights, the pistol will not use its lock-on capabilities, performing similarly to the Hammond P2011. Also damage to pilots will be decreased from 67 to 50, making it a 4 shot kill instead of 3.

It has a rather unique first-person view while unsighted, featuring the player holding it almost sideways in the middle of the screen. The reticle is also atypical in that it is only a mere dot. Despite this, there is actually an 8 degree spread. When aiming down the sight, it has a moderate effective range, similar to other handguns, but it has a very short range for lock-on capabilities. It's not the best weapon to use on moving targets, due to its lock-on time.

Unlike all other handguns to be found in Titanfall, it is actually a primary weapon. This is likely for balance reasons.

Note that the lock-on sound can also be heard by other players, but can be silenced with the Stealth Kit.

Cloaked Pilots will take nearly twice the time to lock on to. If a Pilot cloaks while you're locked-on to them the current locks will break and you'll have to lock-on again.

When using the Smart Pistol with the Enhanced Targeting mod, it will have a 23.8 meter lock-on range and a 36 degree search radius. It'll take 0.34 to 0.59 seconds per lock on a Pilot, 0.1 to 0.15 seconds per lock on Grunts and Spectres, and no delay between targets.

When using the Smart Pistol with the Suppressor mod, it'll take 0.45 to 0.8 seconds per lock-on a Pilot, 0.1 to 0.25 seconds per lock on Grunts and Spectres, and a 0.22 second delay between targets.

When using the Amped Smart Pistol, it'll take 0.32 to 0.55 seconds per lock on a Pilot, and each locked bullet does 101 damage, killing pilots in 2 locks.

The Smart Pistol MK6 is a Pilot anti-personnel pistol that appears in Titanfall 2 that has succeeded the MK5.[1] The pistol is no longer a loadout weapon, instead being available to use as a Boost. When activated, the Smart Pistol replaces your secondary for the remainder of that life.

The Smart Pistol locking on to enemies in mid-air. 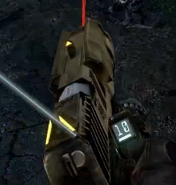