Killed by Jack Cooper and BT

Second-in-Command of the Apex Predators

Slone is a member of the Apex Predators, as Kuben Blisk's second-in-command. She is the secondary antagonist and the final boss of Titanfall 2's single-player campaign. The No Salvage achievement is awarded for defeating her.

Slone would deploy alongside Blisk, Richter and Ash during the opening stages of the Battle of Typhon, intending to wipe out any survivors of the failed Militia assault on the planet. She would be the first of the Apex Predators to cross the landing site of Jack Cooper and Tai Lastimosa, attempting to destroy the Vanguard defending them, BT-7274. However, she would ultimately fail in killing the Titan alone, but instead distract it long enough to allow it to be finished off by her comrades.[1]

The morning following the attack, Slone would direct a number of IMC search teams around the crash site of MCS James MacAllan, eventually instructing Salvage Team Gamma to retrieve the Vanguard-class Titan for salvage.[1] Slone would later be given charge of several captured riflemen, but was ultimately ordered to simply execute them, which she would show no remorse for.[2]

Following the attempted activation of an IMC interstellar beacon by the 3rd Militia Grenadiers, Slone would investigate the now-missing Kane, only to come across his dead body. She would proceed to inform Blisk of the now-deceased mercenary's radio being taken, and the prospect of Militia forces listening in on Apex Predator communications.[3]

Slone would later deploy to the IMC Airbase housing IMS Draconis, and would be seen escorting the Ark onto the carrier, before ordering Viper to take over escort operations.[4] Slone would ultimately take part in the interrogation of Jack Cooper and BT-7274 after their capture of the Ark. Throughout the procedure, she would attempt to persuade Blisk to simply rip the Ark out of BT's chassis, though would be prevented from doing so. Eventually, BT's attempted defense against the mercenaries would allow Slone to put her suggestion into effect, ripping the alien technology out of the immobile Vanguard and reducing it to scrap metal with her Splitter Rifle.[5] Slone would later meet her end in the Fold Weapon's Injector Room, where she would fall at the hands of Jack Cooper and BT-7274.[5] 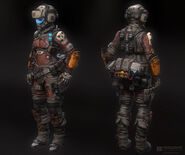 The model for the female Pulse Blade in the Titanfall 2 Tech Test, also used for Slone (sans helmet).