Human consciousness in a robotic body

Simulacrum are robotic soldiers with human minds employed by both the IMC and Frontier Militia, among other organizations. While they bear superficial resemblance to the commonly-fielded BRD-01 Spectre, Simulacra are instead human minds uploaded into robotic bodies. A simulacrum can be considered a form of transhumanism.

A simulacrum is a digital backup of a select individual's memories, knowledge, and personality. It is unknown precisely how Simulacra are made, but their most common application among the IMC and Frontier Militia was to preserve a valued Pilot whose original body was destroyed or damaged beyond repair. A copy of their digitized consciousness is downloaded and installed into a man-sized robotic frame, allowing those Pilots to live on and continue fighting. Nonetheless, it is known that there will be some form of inevitable memory loss from the transfer. Generally speaking, and presumably to avoid confusion, there is presumed to only ever be one simulacrum of a given person walking around at a time.

Due to their human personalities and to maintain vestiges of their past humanity, Simulacra will often decorate or customize their chassis with trinkets or clothing, despite not having a practical need for them. This can be seen in the raccoon-like ponytails serving as "hair" sported by Phase Shift Pilots or the hood and mask worn by Ash, for example. A Simulacrum will still typically identify themselves as masculine or feminine, as well, and this is reflected in their chassis - not only can they speak with a masculine or feminine voice, but also a "female" Simulacrum has a more pronounced bust.

Not everyone takes well to the reality of their situation when they find themselves to be a simulacrum - in fact during "Project 617", the project to develop Simulacrum, it was implied that seeing themselves as such causes the operation to fail. As such, the ego retention system, an essential programming, is used to ensure simulacrum's mental stability by causing the simulacrum never realizes they are a simulacrum at all, that they are still their former self with a normal body; upon receiving any hints that they are simulacrum - be it visual or verbal - the programming will censor such hints, such as changing "simulacrum" to "pilot".[1]. They may keep their old habits or routines they once had in life. However, they may occasionally snapping back to reality violently. The complete original identity of the simulacrum, however, is typically suppressed, and is considered as an impossibility without external intervention. Only two known cases of complete awakening is known: with the prototype Revenant, his awakening is due to a glass shard interfering his circuit. Later Simulacrum such as Ash had additional programming to prevent such to occur, but can still be awaken by listening to a sequence of codes that, when used, is compared to "cracking an egg with a jackhammer". Ultimately, any damage to the Ego Retention System appears to have significant psychological consequences.

Becoming a simulacrum is a process not exclusive to Pilots. Corporations are known to create simulacra of their own agents. That said, even after the end of the Frontier War, simulacra can still find work and prestige. Some have taken to working as soldiers of fortune or even assassins. There has been some controversy surrounding the simulacrum programs of certain companies like Hammond Robotics, if not the entire idea itself, but details are scarce.

In Titanfall 2, Simulacra known as Specialists can be fought as enemies in the campaign. They typically wield support weapons such as the MGL or Mastiff, and will deploy Plasma Drones and Ticks until dead. They are not a major threat by themselves, instead acting as support units. Specialists bear resemblance to Phase Shift Pilots in the multiplayer, but do not use any Pilot abilities. Militia-aligned Simulacra also briefly appear aboard the MCS James MacAllan during the mission The Pilot's Gauntlet.

In Multiplayer, players can play as male or female Simulacra with the Stim and Phase Shift Pilot Tactical Abilities. During the Titanfall 2 Technical Test, Grapple Pilots were given the model of what is now the Phase Shift Pilot, but this was changed for final release.

A Simulacrum known as the Sim Ninja can be deployed as a legendary Pilot in Titanfall: Assault. He wields a sword and can drop anywhere on the map.

Two of the playable Legends in the Apex Games are simulacrums: the prototype simulacrum assassin codenamed Revenant; and later on Ash.

By the year 2734, self-applied requests to be turned into simulacrum upon death require passing psychology exam. Caustic was rejected due to scoring poorly on the psychology exam[2] 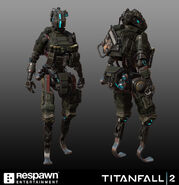 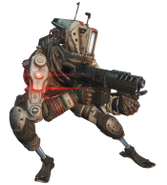 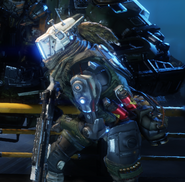 A Militia-allied Simulacrum aboard the MCS James MacAllan

Promotional artwork depicting what appears to be a Simulacrum with a similar mask to Ash.
Community content is available under CC-BY-SA unless otherwise noted.
Advertisement