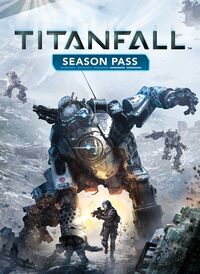 The Season Pass is a DLC pass for Titanfall. The season pass allows the owner to receive all three downloadable content packs, known as "Drop Pods", for a one-time fee of $24.99 USD or £19.99.

In March 2015, the Season Pass (and all accompanying DLC) was made free to all Titanfall players for the game's first anniversary. The Season Pass includes Expedition, Frontier's Edge and IMC Rising.