Search Drones are aerial probing drones that can be seen flying around on Angel City. They're controlled by the Interstellar Manufacturing Corporation in purpose to search for individuals; in this case, the Frontier Militia. The players playing as the Militia can destroy them by shooting them down, which will give the player +5 XP. Search Drones have 350 Health. Search Drones start smoking when it has less than 280 Health.

Search Drones have been reintroduced as Cloak Drones in the game mode Frontier Defense. They are used by the IMC to cloak Titans and Minions as they advance towards the Harvester. Luckily it doesn't shoot back making it easy prey for any pilot.

Lethal Attack Drones - the Rocket Drone and Plasma Drone - appear the Titanfall 2 campaign as robotic enemies employed by the IMC. They are lightly equipped with a laser beam akin to the Charge Rifle, or bright blue rockets akin to Reaper Rockets fired by a Reaper or the shots fired by the EM-4 Cold War. 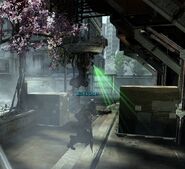 A Search Drone in Angel City