Scorch, short for Scorched Earth, is an Ogre-based Titan class in Titanfall 2,[1][2] and reappears in Titanfall: Assault.

Scorch is a Titan class based on the Ogre chassis. Scorch's loadout is entirely centred around fire. Blunt and direct, Scorch can chain its abilities to force enemies out of important objectives or trap them to deal maximum damage. Scorch achieves this by primarily using its incendiary traps, and the T-203 Thermite Launcher; a single-shot, break-action grenade launcher designed as a lighter and as added damage.

Scorch appears in Titanfall: Assault as a deployable Titan class. Its extremely high Human DPS makes it a very capable Titan for taking out human infantry such as Grunts and Pilots.

The Scorch has an attack very similar to the Pyro Bruiser. It launches thermite projectiles and sets the area it hits on fire. However the Scorch attacks very slow and is vulnerable to Titans that engage in 1v1 combat such as Ronin, Arc Ronin or Atlas. Scorch suffers in combat versus Titans since its only attack is a thermite attack which robotic enemies are resistant to.

A render of Scorch from the Titanfall official website. 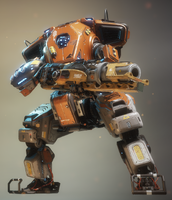 Scorch, as seen in Titanfall: Assault.