Shortly after the Battle of Demeter

Runoff is a multiplayer map featured in Titanfall, available only in the first downloadable content, Expedition.

Prior to the arrival of the IMC, this was one of several water collection and treatment facilities owned by a neutral terraforming company attempting to secure territorial rights, before publicly announcing their discovery of this world. Now these operations have been silenced and placed under IMC control, in service to the new IMC Fleet Operations Base under construction several miles away. Overhead, the remnants of the IMC fleet on the Frontier can be seen arriving sporadically, headed towards the new base for replenishment and repairs. In response to garbled distress signals sent by the original occupants of the facility, the Militia deploys a recon fleet to investigate.[1]

The water processing and drainage from this facility are what was responsible for the unveiling of alien ruins in the Swamplands nearby.

Several map-specific achievements can be unlocked on Runoff.

Early sketches of the map.

Concept art of the map.

Concept art of the map. 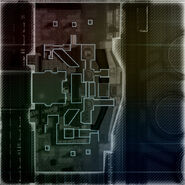