Ronin Prime is a Prime Titan appearing in Titanfall 2's Monarch Reigns DLC. Like all Prime Titans, it features no gameplay or balance differences to the regular Ronin Titan.

Ronin Prime's looks are arguably similar to that of a Samurai. Similarly, the unique Broadsword redesign bears much more resemblance to a Samurai sword than the machete-like design of the original. 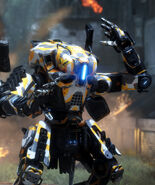