Pilot (Both aircraft and Titan)

Robert "Barker" Taube is a resigned IMC officer and notably skilled aircraft pilot. He once served with James MacAllan prior to the events of Titanfall but quit after the mutiny against Marcus Graves. Rather than join the crew on their new Colony, he fled to Angel City and became an alcoholic.

Barker's skill as a pilot (both of Titans and aircraft) and knowledge of IMC secret programs were invaluable to the Militia both before and after the Battle of Demeter. After Demeter's destruction, he started his own mercenary group called the Angel City Elite, or A.C.E.s, who regularly contract out to the Militia. He played a pivotal support role during the Battle of Typhon, particularly in its final hours, showing off his aircraft piloting skills under extreme pressure. He is also believed to be responsible for the creation of the group nicknamed Marvin's Finest Hour, due to forgetting to relieve a M.R.V.N of his duty in leading Pilot inductees.[1]

During the Titan Wars, Barker served as a good friend to fellow Pilot James MacAllan, conducting several legendary operations against the IMC's enemies during the conflict. These operations would go on to inform the backbone of modern IMC counterinsurgency doctrine.[2]

At some point, Barker was stationed at Base Golden on the planet Leviathan (more commonly referred to as "the Boneyard"), before its abandonment by the IMC.

Barker poorly adjusted to life outside combat, following the Titan Wars. He was eventually discharged by the IMC for his habits as a drunk, leading to him taking up residence in Angel City, where he was seen as something of a celebrity by the local population.

Barker's first appearance during the Frontier War would be his involuntary recruitment by the Frontier Militia, led by his old friend MacAllan. He would be found drinking at a bar, forcibly removed (abandoning his signature shotgun in the process)[3] and extracted from the city. IMC troops would begin to sweep the sector just as he was dropped into the city's sewer system, with numerous Riflemen and Pilots giving their lives to ensure his extraction. This Militia operation would place a bounty on Barker's head worth 50,000 credits.

With MacAllan's ultimate plan to take out the refinery-world Demeter relying on the destruction of the 1991st Combat Support Group stationed at Airbase Sierra, Barker would be critical to the success of the mission due to his intricate knowledge of the IMC blacksite on Leviathan. It was the testing site for a Repulsor Tower that served as the basis for the defenses at the airbase - if the Militia could analyze the decrepit tower at Base Golden, they could potentially find a way to cripple the defenses at Base Sierra and allow the local fauna to destroy the fleet stationed there.

However, Barker would not go along with this plan so easily. Before committing to providing the Militia with the co-ordinates of the Boneyard, he mandated that the flagship IMS Sentinel must be destroyed in order to give the Militia a fighting chance in the war. Ultimately, the vessel would be destroyed by the Orbital Defense Cannon at Outpost 207, and Barker would keep his word. Although he would give the Militia the location of the base and fly the troops there, he would refuse to enter the facility himself due to his own experiences there with the wildlife.

Eventually, Barker would take charge of the Pilot teams infiltrating Base Sierra in the Militia assault there, including providing tactical information and Titan construction to ground forces (while hungover from the previous night of drinking).

Barker would not deploy in the Battle of Demeter itself.

Following the battle of Demeter, Barker (along with now-Field Commander Marcus Graves) would be instrumental in assisting the Militia's war against the IMC. His contributions would mainly include providing the locations of critical IMC robotics factories for Militia assault,[4] proving a big enough thorn in the IMC's side that the Corporation would begin hunting down defectors, eventually conducting an assault on the hidden bootlegging colony manned by Barker's brewing company.[5]

Eventually, Barker would begin to clean up his act, proving a valuable leader for Militia Pilots in the fight against the IMC. He would go on to form the Angel City Elite, a mercenary group based out of his former home-city in search of answers to many of the mysteries found on the Frontier. He would conduct numerous raids against the Remnant Fleet to achieve this goal.[6]

Barker's only known contribution to Operation: Broadsword would be his participation during the Battle of Typhon, serving a key role as an aircraft pilot during the later stages of the battle. He would be first seen during the mission to capture or destroy IMS Draconis, joining the aerial pursuit and using his dropship to save Militia Pilot Jack Cooper from certain doom after being knocked out of a Widow due to an attack by the Apex Predator Pilot Viper and his flying Northstar. He would then "babysit" Titan BT-7274 while Cooper and The 6-4 took control of IMS Malta, before dropping the Titan onto the outer hull of the Battleship to fight Viper.

Barker, alongside Militia commander Sarah Briggs, would later personally save Cooper after the destruction of the Fold Weapon, proving his skills as a ship pilot while navigating his Crow through the debris of the now-rapidly disentegrating Typhon to reach the Pilot. He would then jump the craft to a safe distance, just in time to watch the planet's total destruction.[7]

Following the battle of Typhon, Barker's bounty is still in place, with posters in Angel City promising 50,000 Credits to anyone capable of bringing the Pilot to justice. He also hosts fellow Militia-aligned troops at his own bar.[8]

Barker is typically characterized by two things: alcoholism and rampant distrust of others.

As previously mentioned, Barker failed to adjust to life after combat, and he found sanctuary at the bottom of the bottle. He carries a flask on him regularly, and he is almost always drunk or talking about getting drunk, even during field operations. When sending off Pilots from his dropship, he tends to stagger about while taking a swig from his flask.

While it's unclear what exactly led Barker to drink, a theory is that it helps him cope with his latent distrust of others. Ever since James MacAllan's mutiny against Marcus Graves during the Titan Wars, his faith in other people appeared to be shaken. He is always suspicious of others and their intentions, wary of double agents and sabotage.

Both of these traits are reflected in Barker's style of leadership, particularly among his own Angel City Elites. Whether as a field commander or in general, he has a very casual and somewhat lighthearted style of interaction with his Pilots and associates, calling a Pilot "kid" and regularly inviting them to drink with him after a successful operation and making drinking-related quips during a battle. If a battle is ever going poorly, he reacts with suspicion and suspects foul play or bad intelligence; he even jokes that the Pilot he's speaking to is a double agent working for the other side. Despite his general distrust, he seems to have legitimate faith in his own Pilots, never doubting them and always encouraging them through the ups and downs of an engagement, though he is occasionally surprised at claiming victory.

Politically, Barker has no love for the IMC, especially not since his dishonorable discharge, and he sympathizes with the Militia and their efforts. Nonetheless, he insists on the independence of him and his ACEs as a mercenary unit, partly so they can go about their own agenda of exploring the Frontier and discovering more of its secrets. 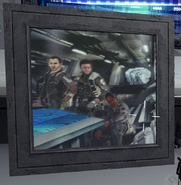 Barker, along with MacAllan and Graves during the Titan Wars

Barker's shotgun being mentioned on the Amped EVA-8 Burn Card

Barker, as of Titanfall 2

Barker on the Titanfall Companion app