Rise is a multiplayer map featured in Titanfall. Militia special forces set up a Long-Range Desert Patrol outpost in an abandoned IMC reservoir. It was added to Titanfall 2 in Operation Frontier Shield.

Militia Special Forces have set up a long-range reconnaissance outpost in this abandoned IMC reservoir, less than a hundred miles from the classiﬁed IMC proving grounds on the planet Gridiron. The reservoir’s towering, sheer walls and a system of convenient zip lines provide Pilots with the perfect means to get around quickly while Titans do battle in the long corridors below. Ejecting Pilots should be very careful to avoid lingering above ground here—it only takes 10 seconds to receive a lethal dose of radiation in direct sunlight.[1]

Most of the action on this map takes place around the bridges. If you’re trying to avoid this battle area, take a zipline to the top wall of the map and wall jump your way around until you ﬁnd the perfect opening for an attack or to sneak behind the enemy.

This map is unique in Frontier Defense, in that there are only two waves. The first wave consists of only two Sniper Spectres, whereas the second wave consists of 224 enemies spanning multiple types of enemies. Also, unlike other maps, you only get a single retry (as opposed to two).

Compared to its original incarnation, Titanfall 2's take on Rise in Frontier Defense is a little more forgiving, using five waves and allowing two retries. Waves consist primarily of Reapers, Nuke Titans, Scorches, and Arc Titans, with Grunts appearing early on. Plasma Drones will also deploy over the top of the reservoir and fly down almost directly on top of the main open area with the Harvester. Reapers may try to use the elevated walkways near the center as long-range harassment and Tick-launching spots. 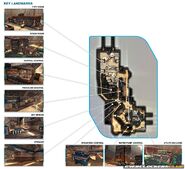 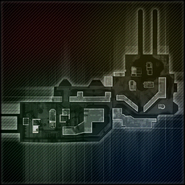 Another view of Rise in Titanfall 2.