Reapers are heavy autonomous war machines, straddling the line between miniature Spectres and ultra-heavy Titans, introduced in Titanfall 2. They were created by the IMC and first encountered by the Frontier Militia on Typhon.

Reapers represent a middle-ground between the human-sized Spectres and Stalkers, and the massive Titans. They are fully automated, agile, relentless, well-armored and deadly anti-Titan units armed with rapid-fire launchers implanted in their forearms that fire Reaper Rockets, projectiles of a very similar vein to the EPG-1, EM-4 Cold War or Titan Sentry judging by the visuals and effects of the projectile. They can quickly wear down a Titan's armor at close range, but scatter over long distances and move fairly slowly. Reapers usually remain in one area and move in bursts; barraging the enemy with a hail of plasma, then relocating via a leap with their thrusters. They are also capable of charging sprints and leaping up to great heights to attack enemies in melee range with powerful energy-based AOE ground strikes, particularly when in combat against human infantry.

In the Titanfall 2 campaign and Frontier Defense, Reapers can deploy Ticks but are incapable of this in Attrition and Bounty Hunt. Something else that they do that was exclusive to the single player campaign mode was self destruct when the reached the end of their health, spraying the surrounding vicinity with burning thermite, damaging any enemy units close by, similar to how the stalker blows up when shot in the power cell on its back.

Reapers are very durable, their heavy plating rendering them nigh impervious to small-arms fire. Dispatching them is relatively simple when using Titan-scale armaments, and although they have critical areas where there are cooling vents on their hunched backs and skeletal midsections, these can still endure a lot of punishment from standard firearms, and so Pilots will likely resort to employing anti-Titan or Grenadier weapons, or just avoid them entirely.

In multiplayer, Reapers are encountered in Attrition and Bounty Hunt, appearing in the later stages of a match. When encountered in these modes, Reapers lack the ability to deploy Ticks, and their late deployment means that most pilots will have a Titan ready to combat them. Reapers pose little threat to Titans unless grouped together and focussing their fire, as targeting, destroying and keeping track of three or four can be difficult to do, especially in a damaged Titan.

Like a Titan, Reapers can crush enemy Pilots and Titans when deploying. As they drop in the same locations as players who choose to respawn in their Titans, there are rare occurrences where a Titan-respawning player is almost instantly killed because a hostile Reaper spawns on top of them right after they drop.

In Frontier Defense, Reapers are capable of inflicting significant damage to the Harvester in a very short span of time; they have a tendancy to reach high locations with which they can bombard the Harvester with their weaponry, as well as regularly deploying Ticks. Care should be taken to ensure no Reapers slip through to the Harvester; just one can do a lot of damage quickly, and three or more can easily destroy even a fully-shielded, intact Harvester before help can arrive.

Only one variant of Reaper is useable in Titanfall: Assault. It is known as the Reaper Bruiser.

A Reaper starting an electrical attack.

A Reaper finishing its swing. 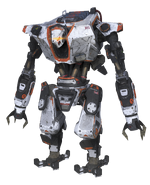