90 - ambiguous stat that means basically nothing

The R-201 Special Operations Assault Rifle (SOAR)[1] is a Pilot anti-personnel fully automatic assault rifle manufactured by Lastimosa Armory, serving as the successor to the R-101C Carbine and the predecessor to the R-301 Carbine. It appears in Titanfall 2.

The R-201 Carbine was manufactured by Lastimosa Armory sometime between the Battle of Demeter and Operation: Broadsword to serve as the successor to the R-101C Carbine. Although the R-101C was still utilized by combatants around this time, the newer R-201 became the favored rifle among the Frontier and soon became a standard issue rifle among the Interstellar Manufacturing Corporation and Frontier Militia during the Frontier War.

After the end of the Frontier War, Lastimosa Armory developed yet another successor of the R-series of assault rifles, serving as the direct successor to the R-201, known as the R-301 Carbine. By the time of the Apex Games, it appears the R-201 has been completely phased out in favor of the R-301.

The design of the R-201 Assault Rifle is similar to its previous incarnation, but with a sleeker design and a grey finish. As a weapons platform, it is highly customizable with countless accessories and upgrades available. Replacement parts are easily printed with the simplest base materials and schematics are widely shared, making the R-201 a very popular weapon among Frontier Pilots. Upgrades from the R-101C to the R-201 are enhanced ergonomics, an improved Irondot reticule and an upgraded internal CPU core that regulates barrel temperature, weapon malfunctions and ballistics.[1]

In terms of performance, the R-201 Carbine is a slightly improved version of the R-101C Carbine, making it an extremely versatile and evenly balanced assault rifle. It performs at 25 damage with damage drop starting at 28.575 meters (1500 units) and drop ending at 66.675 meters (3500 units), and a fully automatic fire rate at 810 rounds per minute. Its magazine can hold 24 bullets and 30 with the Extra Ammo mod equipped. It is praised to have extremely good accuracy, as it has an accuracy of 90. 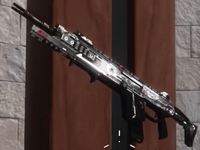 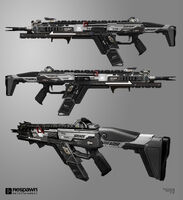