The Quad Rocket, formerly called the Titan Rocket Launcher, is a Titan rocket launcher that appears in Titanfall and Titanfall 2. It is manufactured by Brockhaurd Manufacturing.

The Quad Rocket is a weapon that fires a tight-knit cluster of 4 rockets at the target, exploding upon impact.

The weapon is best used against enemy titans, having limited effectiveness against mobile pilots.  However against groups of lesser enemies the launcher becomes more effective than against single enemy pilots.

Perhaps the greatest strength of the default Quad Rocket is its ability to deal high splash damage. Its big blast radius often means that you can fire indirectly at the ground near the legs of enemy Titans and still deal comparable (if not equal) damage that a direct hit could attain. Because of its low magazine count, extended magazines should be chosen. While rapid fire will give you more rockets per magazine overall, this significantly decreases the splash damage of the Quad Rocket, removing its key strength. The Stryder or Atlas titan chassis are the best with this weapon, the former allowing a hit and run strategy, deal significant damage and then retreating while you reload before the enemy titan has time to respond. The latter allowing a more aggressive tactic while still giving you flexibility.

The Quad Rocket makes its return in Titanfall 2, though it is only available in the campaign as a part of the Brute loadout. This version of the weapon combines the Rapid Fire mode from the first game with the regular mode, allowing for hip-fired shots to fire the traditional four rockets, but aimed shots to fire single-rockets. This allows for greater versatility in the field, and when paired with the Northstar chassis' flight capabilities and Vortex Shield, the ability to make rapid air strikes and hit-and-run style attacks against heavily armoured foes.

Visually, the weapon's main upgrade is in the form of its grey finish, as opposed to the first game's brown.

More Titanfall 2 concept art
Add a photo to this gallery 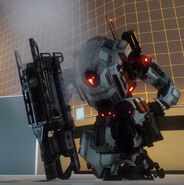 Render of the weapon in Titanfall: Assault

Add a photo to this gallery
Retrieved from "https://titanfall.fandom.com/wiki/Quad_Rocket?oldid=40654"
Community content is available under CC-BY-SA unless otherwise noted.