The Predator Cannon is a rotary cannon manufactured by Lastimosa Armory employed by the Titan Legion in Titanfall 2.

The Predator Cannon is a rotary cannon utilised by the Legion chassis, used for front-line damage output. Before firing, it requires a short "spin-up" time before it can start sending lead downrange. The cannon can be spun up by holding a secondary trigger, used to aim-down-sights (ADS). In Long Range mode, this will zoom in the cannon considerably, making it able to compete with Northstars and Ions. In Short Range mode, this will simply spin up the weapon, allowing the operator to "hip fire" it, as well as reducing its spread.

Another factor of long range mode is that players will deplete their magazine twice as fast, since every shot consumes two bullets. This requires careful players to manage the use of long and short range modes for maximum benefit.

The Power Shot can also be fired from the cannon, firing all eight barrels at once in a burst. Like the spread for long/ short range, the Power Shot will fire in a shotgun blast capable of insta-killing infantry caught in its wake in short-range mode, and fire more like a sniper in long-range mode, doing similar damage to Northstar's Plasma Railgun. The cannon can also deploy the Gun Shield - a Particle Wall shaped around the cannon that allows Legion to provide sustained fire while taking little-none himself. However, to maximize the benefits, crouch while the gun shield is active, because smart players will aim at Legion's still exposed legs and left shoulder.

The final tool in the arsenal of the Predator Cannon is the Smart Core - when activated, the smart core will auto-target enemy troops in a manner similar to the Smart Pistol but with much faster lock on, and will provide bottomless magazine capability for the twelve seconds it is active. For maximum effectiveness, skilled Legion operators will wait until their current magazine is nearly empty before unleashing the Smart Core, ensuring that their volume of fire doesn't stop, and won't give enemy Titans time to push forward. There is also a kill counter in the screen so operators can monitor their kills.

The Predator Cannon as seen in the Meet Legion trailer.

A Legion firing the Predator Cannon. 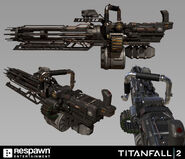 Render of the Titanfall 2 model.