The PR-01 Plasma Railgun[1] is a Titan electrical directed-energy railgun that appears in Titanfall and Titanfall 2. It is manufactured by Wonyeon Defense.

The Plasma Railgun is a Titan-sized sniper weapon, used for suppression of armoured targets from a distance. The weapon fires a bolt of plasma, accelerated by a system of charged rails. The level of charge determines the power of the shot fired, meaning that simply pressing the trigger produces a low-power shot while charging to full will produce one capable of severely damaging enemy Titans.

The Plasma Railgun includes an in-built optics package with a variable zoom, that can be further upgraded with the Threat Optics to provide easier target acquisition. The Instant Shot upgrade can additionally remove the need to charge the railgun - this allows it to fire a high-power shot with one trigger pull, but at the expense of higher damage potential. The Piercing Shot upgrade can upgrade the railgun's ammunition to fire through multiple targets.

The Plasma Railgun fires a traveling plasma pulse with high accuracy out to long range. When zoomed, the weapon's power is charged up through several stages until reaching full power. Unlike the Charge Rifle, the charge can be held indefinitely. Zooming out will cancel charge process without firing.

The Plasma Railgun has a range of 600 metres, while dealing 300 and 500 damage to infantry and Titans, respectively. As such, even an uncharged shot will instantly kill any Pilot caught in its wake.

The Railgun is best used on larger and open maps, where its high damage (when charged) coupled with its extremely fast projectile can be used to a Pilot's advantage. This can be best used in conjunction with the Stryder with Instant Shot, which favours high mobility and a hit-and-run game style where the standard Railgun is less effective due to its low damage per uncharged shot. If used with the Ogre, it is better to equip the Factory Issue or (preferably) Extended Magazine, as the Ogre is a slower playstyle more befitting of the need to charge the Plasma Railgun. The heavier armour and shielding of the Ogre will additionally allow it to sustain more damage from enemies while charging the weapon, something that would be crippling for the Stryder. For a defensive option, the Particle Wall is extremely useful, as you can charge up a shot without taking significant damage while staying behind it.

Despite dealing the most damage per maximum charged shot of any Titan weapon, the Railgun is a poor choice against Pilots, as it is difficult to hit a Pilot. it is recommended to take salvo rockets or a cluster rocket alongside the railgun to kill or deter pilots and assist in killing titans.

The Plasma Railgun returns in Titanfall 2, largely unchanged in function. However, this time, it has a variable zoom, and can zoom in both long and medium ranges. This allows the railgun to be more versatile in the hands of Northstar. It can be upgraded with the Piercing Shot to hit through multiple targets, or the Threat Optics package to apply a Pulse Blade effect on any target in sight. The Plasma Railgun is affected by two Titan Aegis Rank upgrades; Plasma Railgun: Quick Charge and Plasma Railgun: Critical Hit.

The Plasma Railgun returns in Titanfall Online - it can be seen in the hands of the Stryder Tier 2. 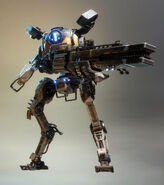 A railgun wielded by Northstar

The Railgun, showing its magazine.

The Railgun's weapon icon in Titanfall 2.