Outpost 207 is one of three hundred IMC outposts built at high altitude on a mountainous moon. The outposts’ massive railguns are linked together in a defensive array to protect a nearby IMC space shipyard.[1] The Orbital Defense Cannon was originally trained on interstellar shipping routes utilised by the IMC, but is now trained on defending an extremely valuable IMC shipyard in low orbit.[2] Staffing the outpost is light work, meaning that the majority of the staff is composed of MRVN Automated Assistants.

During the Frontier War, the facility was assaulted by forces of the Marauder Corps, along with Outposts 197 and 210. A Militia vessel, devoid of life, was sacrificed as a decoy for the outpost's main cannon, while Crows deployed troops. IMC and Militia forces would clash in the outpost, with Bish eventually able to fire the main gun at the stationary IMS Sentinel to the point of the ship's destruction.[3]

Titans have three main routes: the rocky terrain in the center, the bridge at the rear of the facility, and the service route that runs through the base of the cannon. Pilots are advised to control the second ﬂoors of the Armory and Cannon Building, and to stay away from the bridge below the gondola lines, where there is little cover to protect them from Titans.

This map may be one of the smallest of the maps, but it still both provides close-quarter combat play inside the buildings and long-range sniper play from the Observatory to the Factory. 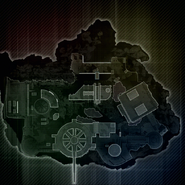 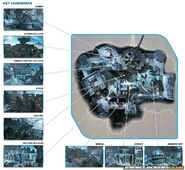 A panorama of the base