The H-KA02/a Ogre Heavy Titan is a Titan model produced by Hammond Armament Division and Wonyeon Defense.[1] Developed as an extremely tough Titan chassis, the Ogre's design has been compared to a main battle tank, optimized for taking higher amounts of damage and dealing out more than the Atlas or Stryder Titans. The Ogre stands slightly taller than the Atlas and has bulkier armor. The main entry point of an Ogre is via a large hatch on its top rather than the chest, like the Atlas or Stryder. The Ogre is equipped with a Shield Core, which amps the Titan's shield for a limited time.

The Ogre is unlocked by completing both the Frontier Militia and IMC multiplayer campaigns.[2] As of Game Update Four, the Ogre can also be permanently unlocked by reaching level 30.

The stats for the Ogre Titan are below.[3] The stat's ranking relative to that of other Titans is displayed next to the stat unit.

The Ogre excels at close range and one-on-one engagements with other Titans. It is best used in conjunction with close-range Titan weapons such as the Quad Rocket or the Triple Threat. Avoid open areas with long lines of sight where the Ogres slow movement speed puts it at a disadvantage to more mobile Titans. Close engagements in tight alleyways are where the Ogre is most useful, as its superior armor allows it to outlast other Titans in one-on-one battles.

Ogres work best as heavy support/defensive units in a battle. They should work to support other Titan units that serve on the front line. Ogres excel as defensive units. An Ogre with an active (or readily charged) Shield Core as well as the Particle Wall ability is a very effective defense for a Flag or Hardpoint and only a determined assault can break through.

The Ogre's slow speed, as well as its large size, makes it more susceptible to boarding actions by enemy Pilots than other Titans and the player should always take caution and listen for the sound of a Pilot on the roof. This large size and slow speed also make the Ogre an easy target for other Titans. Though the Ogre makes up for these shortcomings with more health and armor than other Titans, allowing them to survive for longer in a crossfire. If attacked, the Ogre's slow speed and single dash can make retreat difficult, if not impossible. Therefore, the Ogre should turn and defend itself and is likely to outlast its attacker.

Two variations of the Ogre chassis exist in Titanfall 2. Scorch is a dangerous Ogre Titan whose attacks are primarily fire-based. Legion is an Ogre equipped with a large Gatling-styled chain gun and distinguished by his ability to create a shield around it.

At launch, both Ogres had no dash by default and relied on Turbo Engine to have one - this was changed in Operation Frontier Shield, and now both Ogre Titans have a single dash by default (The same as Atlas-class Titans such as Ion or Tone). Turbo Engine now reduces the cooldown of this dash from 10 seconds to 5 seconds, as opposed to granting two dashes.

The Ogre returns in Titanfall: Assault as a playable unit. It is equipped with a Quad Rocket, and it is distinguished by its ability to take an inordinate amount of punishment before falling.

Strategically, the Ogre should be on the front lines of any Titan offensive. Its damage is passable, but more importantly, it's something for enemy units to fire upon when it threatens, freeing up any deadlier allied units to do their work unharrassed. Dropping it in tandem with another friendly Titan nearby is a great way to break the enemy line.

In Titanfall Online, the Ogre appears alongside at least three of its Tier 2 variants: Ogre Marauder, Ogre Murrower and Ogre Wildcat. The Ogre Wildcat, in particular, is owned and piloted by Frontier explorer Nora. The Ogre also forms the basis for the separate Destroyer chassis.

A turnaround reference of the Ogre. 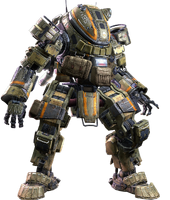 An Ogre in Militia livery

An Ogre right after being deployed.

A Pilot boards his Ogre. 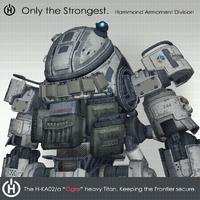