The MK VIII Medical Lifeboat is a type of escape pod utilised by the IMC and Frontier Militia, utilised for rapid evacuations from doomed spacecraft and medical treatment of injured personnel. Several lifeboats were used to evacuate Militia personnel from the MCS James MacAllan at the start of the Battle of Typhon - including Jack Cooper. Later on, they were used by IMC Marines to evacuate the IMS Draconis. 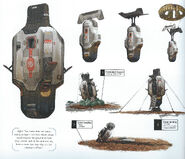 Render of the Lifeboat's cockpit.
Add a photo to this gallery
Retrieved from "https://titanfall.fandom.com/wiki/Mk._VIII_Medical_Lifeboat?oldid=36687"
Community content is available under CC-BY-SA unless otherwise noted.