• Operation: Broadsword
The Riflemen[1] are the main infantry of the Frontier Militia - comprised mainly of Grunts and limited amounts of Spectres, they are the Militia counterpart for the IMC Marine Corps. After the Battle of Demeter, the riflemen are much more like an organised military than ever before, and have seen a massive swell in numbers thanks to significant defections from the IMC.

Militia troops were deployed in The Fracture Operation, to provide groundside assistance for vessels attempting to refuel at Site M41 - this would be the first deployment for many soldiers including Jack Cooper. Later, the troops were deployed at Colony G21 to investigate reports of an IMC massacre, before engaging the IMC's new Spectres. Militia troops would then be deployed in a variety of battles at Angel City, Outpost 207, Boneyard, Airbase Sierra and finally, Demeter to wage their war against the IMC.

During Operation: Broadsword, several riflemen companies including the 2nd Militia Fusiliers, 3rd Militia Grenadiers and 41st Militia Rifle Battalion would be assigned to the 9th Militia Fleet to investigate reports of IMC activity on Typhon. The fleet would be intercepted, and many troops stranded across the planet due to their emergency deployment. Many troops would be taken prisoner and summarily executed, though many others would regroup and wage their war against ARES Division until the planet's destruction.

Due to the Militia's reliance on scavenging, raiding the IMC and stealing what they can find, the Riflemen use a wide variety of weapons - whatever is available on-hand. Militia troops can be commonly seen wielding V-47 Flatlines, Hemlok BF-Rs, R-101C Carbines, R-201 Assault Rifles, Hammond P2016 pistols and many other kinds of weapon.

Militia troops make use of Crow dropships and Drop Pods for insertion into combat zones.

Standard Militia infantry are divided into several enlisted ranks of Riflemen - these Riflemen classes start at Riflemen Class 3 (Usually abbreviated to RC3) as the lowest - likely equivalent to Private, with RC2 and RC1 being additional basic infantry ranks available before NCO status.

Riflemen, like IMC Marines, are deployed in Fireteams of four. These teams (assuming the Militia uses a structure similar to modern-day militaries) are likely lead by a Corporal or Sergeant, in turn making up squads and platoons. Captain is the highest rifleman rank currently seen held by non-Pilot and non-officer personnel within the Militia, likely leading a Company.

The highest level of organisation seen for Riflemen thus-far is the Battalion (such as the 41st Militia Rifle Battalion). It is currently unknown if higher-level units such as Regiments or Divisions exist, or if the Battalions report directly to the Corps the are assigned to (such as the Marauder Corps). 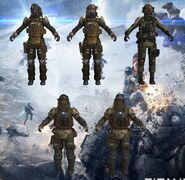 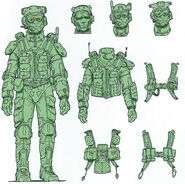