They are mechanical personnel intended for manufacturing and other such routine tasks. They can be seen on many maps repairing machinery or simply walking around. They vary in appearance depending on the map - e.g. red Marvins intended for firefighting duties can be found on the map Demeter, and having different heads in War Games.

Players do not get any Attrition points or direct XP for killing them, however players can earn XP by completing challenges which require them to kill a certain amount of Marvins, such as Innocent Bystander. Marvins have the same health as Grunts, cannot be executed, and when the player kills one only a hitmarker shows on the screen. When a Marvin is attacked, the smiley face on its chest will change but will take no action against its aggressor. Marvin kills are recorded by individual weapon in the stats menu. When playing as the Militia, a Marvin takes the place of the Spectre that signals the Pilots to jump in the beginning of the match. This Marvin will have a smiley face painted on its chest.

Given enough stimulation and exposure to ideas, it's possible for a MRVN to be "uplifted" in a way, becoming smarter and more capable than their bretheren, or at least given more responsibility. Such potential for uplifting may simply be built into a particular MRVN's capabilities. The most exemplary case of this is Pathfinder, a self-aware MRVN competing in the Apex Games as one of its Legends in order to find his creator; not only is he capable as a high-level combatant and tactician, but he even demonstrates vestiges of a personality in the way he speaks and carries himself. 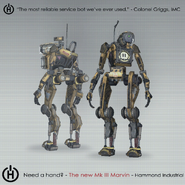