MOB-1316 is never named, and never speaks, simply doing whatever Sarah Briggs commands it to do. MOB is first seen in the mission Trial By Fire, and later seen during The Ark - where it rides in a Widow dropship. "MOB 1316" is seen on the side of her Titan. 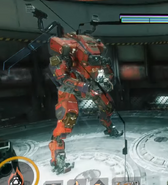