Lagoon is a multiplayer map featured in Titanfall. It's set in a tropical shanty town, centered around a Interstellar Manufacturing Corporation megacarrier that made an emergency landing.

This small ﬁshing village on the outskirts of the Freeport system quickly became a ﬂashpoint for IMC-Militia conﬂict when a distressed IMC carrier made an emergency landing nearby. Key landmarks include an abandoned temple of mysterious origin built next to the sheer cliﬀs behind the village, portable IMC base structures, and the ship itself. Snipers frequently clash over control of the cliﬀs that bisect the village, which is accessible via a small network of zip lines.[1]

The various zip lines allow you to quickly travel around the map. Take advantage of these zip lines by using them to run ﬂags, get to an area quickly to assist your team, or even drop in to rodeo attack a Titan. The fight takes place on the east side of the map, the west side is usually deserted. 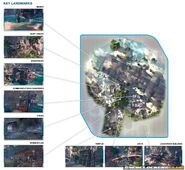 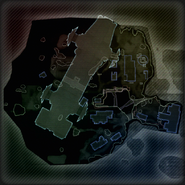