The LG-97 Thunderbolt[1] is a Pilot anti-Titan weapon that appears in Titanfall 2.[2]

The LG-97 Thunderbolt is a Pilot anti-Titan energy projector that fires a large, slow-moving ball of electricity that causes damage to any unit within a wide radius around its flight path. Upon striking a target, it explodes in a spherical blast, which can hurt the pilot if accidentally fired point-blank. Targets affected by the Thunderbolt suffer a disruption to their sight similar to that caused by an Arc Grenade or a Monarch's Energy Siphon, though the effect is very short-lived.

The Thunderbolt is a very effective tool for rapidly gaining Titan meter, due to its constant, high AOE damage. When fired into clustered enemy Titans or Minions, it can provide as high as ten or twenty percent Titan meter. As such, it is very effective on clustered, confined maps such as Angel City, Relic or Drydock. However, while it can do good damage to Titans, the Thunderbolt is unable to kill Pilots or even Grunts if they have full health, not even on a direct hit(That said, it is not unheard of to accidentally steal the occasional kill should an injured enemy Pilot blunder into the Thunderbolt's path). This means the Thunderbolt should not be carried around carelessly: Pilots should stick to their main gun or pistol until they're ready to fire it.

Concept art of the Thunderbolt.

Render of the Thunderbolt 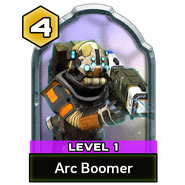 The LG-97 in the hands of the Arc Boomer