Leader of the Apex Predators

Kuben Blisk is a South African mercenary Pilot who served in the IMC's forces as a ranking commander and contracted mercenary. He is the leader of the Apex Predators, an infamous outfit of ruthless freelance Pilots. After the end of the Frontier War, he went on to create a popular bloodsport competition called the Apex Games. He serves as the deuteragonist in the IMC story in Titanfall, one of the two main antagonists of Titanfall 2, and plays a background role in Apex Legends.

Born on Earth in the Core Systems, Blisk began his career as a fighter at a young age in the Thunderdome games in the Outlands, Which was in the frontier. When the Titan Wars began, Blisk enlisted in the IMC’s army and quickly climbed the ranks to commander. However, the politics and corruption of war pushed the Blisk into the life of a mercenary, where he could control his own fight and answer to no one but himself. As a mercenary, he provides Combat Intel and Counterinsurgency services; his first contract with the IMC concluded with his outfit making enough money to retire to a tropical paradise. But after considering the excellent pay, and more importantly the opportunity to lay waste to everything in sight with state-of-the-art hardware, Blisk decided that the IMC's offer of renewal was just too good to pass up.[1][2]

At the time of the Fracture Operation, Blisk was serving as a direct advisor to Vice Admiral Marcus Graves, holding the provisional rank of Sergeant.[3] During the battle, Blisk served to coordinate troops on the ground and inform Pilots of overall mission progress.[4] Following the discovery of life signs eminating from Sector Bravo-217, Blisk would be given charge of an expedition and eventual massacre of Colony G21 on planet Troy.[5] Following the eruption of combat on the planet, Blisk would lead a team in an attempt to take control of the IMS Odyssey and assassinate James MacAllan. Ultimately, he would fail, and MacAllan would be extracted by the Militia.[6]

Blisk would not then take direct action during the battles of Angel City, Outpost 207 and Base Golden, once again serving in a combat intel role. He would later deploy in the Battle of Airbase Sierra, leading a team into the tunnels beneath the base in an attempt to engage and kill Militia operative Sarah Briggs. Ultimately, he would succeed in wounding Briggs, though would fail to kill her or prevent the destruction of Airbase Sierra.[7]

During the Battle of Demeter, Blisk would deploy personally with several Pilots via Drop Pod onto the surface of the planet, with orders to stop MacAllan from detonating the reactor - thus delegating his responsibilities of coordinating the ground forces to Spyglass. Blisk would corner MacAllan in the reactor, firing on the Militia commander before being ordered by Graves to engage in hand to hand combat only out of fear of damaging the reactor. Blisk would then be ordered to evacuate the facility once clear that the reactor meltdown could not be stopped.[8]

Three months after the actions on Demeter, Blisk had been promoted to Commander and Spyglass has become Vice Admiral in charge of IMC forces in the Frontier. Blisk was disgusted to learn that Graves deserted the IMC before the conflict at the Hammond Robotics Spectre production facility.[9]

During the battle, Graves tried to reason with Blisk, saying that his forces are machines without a conscience who are loyal only to their operator, and that together they could win. Blisk rejected Graves' offer, claiming that he had a job to do and would see it through, and claimed that Graves had no place to speak about loyalty due to his defection. Graves desperately reminded Blisk that against machines and mercenaries such as himself, the Militia would come out victorious; Blisk responded that he would willingly fight Graves without being paid, before terminating the connection.[9]

On field deployments, Blisk relied on a Combat Advanced Round Submachine Gun and his knife as weaponry. In addition, Blisk had a ship of unknown classification hidden on Demeter for his retreat to the fleet.

Five years after the Battle of Demeter, Blisk entered his newly-staffed mercenary group - the Apex Predators - into a contract with General Marder and the ARES Division, a research wing of the IMC. Blisk and the Predators deployed to the planet Typhon, where they were to oversee security operations and take charge of the IMC garrisons on the otherwise remote and uninhabited planet. Their ultimate objective was to protect the Fold Weapon, a newly discovered ancient superweapon on the planet, as well as its power source, the Ark.

Blisk inevitably crossed paths with the Militia once again when the 9th Militia Fleet arrived on Typhon to investigate the planet, as part of their Operation: Broadsword initiative. While the planet's orbital cannons chewed up the fleet in orbit, he and his Predators set upon the 41st Militia Rifle Battalion when they hot-dropped onto the planet. He - and his Legion Titan - distracted Captain Tai Lastimosa long enough for Ash to mortally wound Lastimosa and disable his Vanguard Titan.[10]

Over the ensuing day, Blisk was largely involved in operations on Typhon in a command capacity, ordering his mercenaries around and conducting searches for Militia survivors after stymieing their initial invasion. During this time, members of his outfit started dying one after another; he only found out after Slone's discovery of the dead Kane and his stolen communication unit. Realizing a Militia soldier was potentially listening in on him for an extended period of time, Blisk warned the interloper about "trying to be a hero."[11]

When the IMS Draconis crashed after Militia forces gave aerial pursuit to capture the Ark, Blisk was present at the crash site to round up any survivors. With the help of IMC Marines, he captured Militia Pilot Jack Cooper and the remains of his Vanguard-Class Titan, BT-7274, for interrogation at a remote site near the Fold Weapon. Face-to-face with the man who killed four of his best Pilots, his attempts to get Jack to open the Titan's cockpit to give him the Ark failed, leading him to threaten to shoot Jack in the head if the Ark was not released. BT pretended to comply, using the opportunity to attempt to kill Blisk in the process. Blisk avoided the sneak attack, and Slone - standing guard nearby with her Ion Titan - recovered the Ark before reducing BT to slag.[12]

Blisk and Slone both left with the Ark in their possession, abandoning Cooper to his fate. They arrived in the Fold Weapon's injector room without incident, and while Slone deployed the Ark into the core of the Fold Weapon, Blisk stood inside his Legion Titan and spoke with a hologram of General Marder to confirm the end of their contract and collect payment. It is during this dialogue that Jack Cooper and a newly-revived BT-7274 arrived in the injector room in hot pursuit. Blisk momentarily withdrew from the scene, delegating Slone - his last surviving lieutenant - to kill the duo and "keep the salvage." Though she successfully crippled BT, Slone ultimately lost the duel and was killed.[12]

After Slone's death, Blisk stood atop BT's cockpit on foot to confront the Militia Pilot one last time. Instead of finishing him off, he congratulated Cooper on his victory. Whether out of respect for the Pilot or sticking to the letter of his contract, he explained that since his contract was completed, he had no reason to kill Cooper, since he does not kill for free. Instead, he left Cooper an Apex Predator calling card, saying that he earned it, offering him a standing invitation to the Apex Predators in case Cooper ever decided to "fight for himself" rather than the Militia. General Marder hotly protested and ordered Blisk to kill Cooper; Blisk refused, as he claimed it was not in their contract and that he had "other people with money to see".[12]

With that, Blisk fully retreated and left Typhon as the last surviving Apex Predator. He went on to rebuild the ranks of the Predators with new mercenaries, and he continued to serve in theaters across the Frontier.

Years following the Battle of Typhon, Blisk continued to operate on the Frontier, now a part of the infamous Apex Games. He introduced newcomers to the popular competitive bloodsport where individuals from all across the Frontier come to the fringe Outlands to enter and compete for glory and more personal reasons. Given the name and how the games are littered with Apex Predator imagery, it is a possibility that Blisk is the founder and organizer of the games. It is unknown what Blisk was up to in the intervening years between the Battle of Typhon and the opening of the Apex Games.

A ruthless mercenary, Blisk - and the Apex Predators, by extension - lives for the paycheck; as far as he's concerned, anything is worth doing as long as he gets paid for it. His loyalty to an employer lasts only as long as his contract with them.[13] He loves his weapons and toys almost as much as he loves his money, always eager to try out new hardware and discover the newest ways to kill a man. As well, he lives for the fight and feels most comfortable on the battlefield.

Blisk will stop at nothing to complete his objectives, even at the cost of collateral damage and loss of innocent life. At times, he seems to enjoy killing a little too much, leading massacres on civilians,[5] shooting down transport ships,[4] even waxing philosophical on the ways he has killed a man. He will do whatever is required to complete his contracts and shows little to no empathy for his enemies, especially the Frontier Militia. In Blisk's eyes, the Militia are nothing but bloodthirsty "filthy terrorists" who preach for freedom and prosperity as an excuse to cause chaos and destruction throughout the Frontier. This hatred extends to the point where Blisk believes that any civilian even loosely connected to the Militia are potential terrorists and should be put down.[4] It must be noted that these comments and behavior occurred while under contract with the IMC, making it unclear whether these are his true beliefs, or simply what he is being paid to think.

About the only thing Blisk doesn't knowingly place in excessive jeopardy are his fellow Apex Predators. Loyalty to an employer is one thing, but loyalty to his fellow men is another. As a field commander, he insists on leading by and appealing to merit. He pushes his mercenaries hard to finish objectives and defeat their enemies, mostly on the principle that if they don't win, they don't get paid.[14] He doesn't like things to take longer than necessary and abhors dawdling about or making things more difficult than they need to be. He believes in natural selection and the idea that the strong dominate the weak;[15] not only is this a way of fostering loyalty to the Predators by appealing to the will to be stronger than all others, but also it serves as a way for his mercenaries to compete against each other and improve their skills. To Blisk, only the strongest deserve to be an Apex Predator.

As part of being a fully trained Pilot, Blisk is notably skilled at hand-to-hand combat and acrobatics, even being able to jump out of the way of missiles fired in close proximity by BT-7274.[8][13] 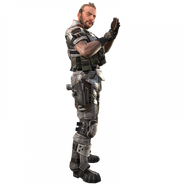 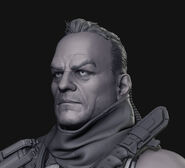 A render of Blisk from Titanfall 2.

Another render of Blisk's Titanfall 2 model. 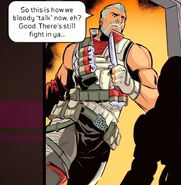