Killed by Jack Cooper and BT

Kane is a member of the Apex Predators and supporting antagonist of Titanfall 2. A ruthless mercenary with a mental state to match, Kane's wild, unpredictable nature makes him an extremely dangerous Pilot. Alongside Kuben Blisk, Slone, Viper, Richter, and Ash, Kane was employed by the IMC to transport the Ark to the Fold Weapon on Typhon. As part of his contract, Kane was given command of IMC forces stationed within the Reclamation Facility.

Kane is a known narcotics dealer and abuser. This fact is further accentuated with his shifty, highly volatile way of speaking. He has many scars and a damaged eye, likely a result of said drug abuse. He tends to verbally abuse everyone around him, his favorite derogatory term being "scrub".

During the Battle of Typhon, Kane was assigned to the defense of the Reclamation Facility, and given a contingent of IMC troops to command. Following the assault on the planet by the 9th Militia Fleet, Kane would kill several Militia Pilots in his Scorch-class Titan. During this time, Kane would continuously taunt the Militia personnel trapped in the facility, while berating his own troops for their ineffectiveness against Jack Cooper. After numerous failed attempts on behalf of the IMC infantry to kill the Pilot, Kane would eventually deal with the problem personally, engaging Cooper and BT in his own Titan.[1]

However, Kane would ultimately lose this duel to the Militia Pilot, despite his previous successes. Jack would then be able to retrieve Kane's helmet radio, ultimately allowing him to eavesdrop on IMC communications for the remainder of the operation on Typhon.[1] 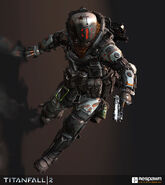