The Hemlok BF-R is a heavy burst-fire assault rifle employed by both IMC and Militia forces fighting on The Frontier. Although not as commonly seen as the more standard R-101C Carbine and R-201 Assault Rifle, the Hemlok is still a relatively common sight amongst the hands of Pilots, Grunts and Spectres alike. Its integrated CPU can fire controlled bursts from two, three, five or to a full magazine dump in one trigger pull. Its bulk has been weighted specifically for recoil compensation, as escaping gases port from the multiple vents located near the muzzle. With ideal stopping power and a high caliber round, the Hemlok is a worthy choice of elite Pilots of the Frontier.[1]

In Titanfall, the Hemlok can only be seen in the hands of Minions in Frontier Defense.

Reaching any tier of any challenge will grant one Amped Hemlok Burn Card.

The Hemlok returns in Titanfall 2 with an updated look. Several distinct changes to the weapon can be noticed, including a redesign of the barrel shroud and magwell. It can be unlocked at level 13 or bought for 100 Credits. It can be found in the hands of enemy Grunts in both Campaign and Multiplayer. It performs similarly to its Titanfall version, being a burst-fire assault rifle with high accuracy and a fast time-to-kill out of close quarters. As in the previous game, it is advised to bring a good close-quarters oriented sidearm like the RE-45 Autopistol.

A Spectre holding a Hemlok.

A Hemlok with a scope, in first-person view.

The Hemlok, midway through reloading 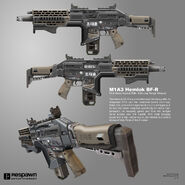 Concept art for the Hemlok in Titanfall 2.

The Hemlok's HUD icon in Titanfall 2.
Add a photo to this gallery

Retrieved from "https://titanfall.fandom.com/wiki/Hemlok_BF-R?oldid=47344"
Community content is available under CC-BY-SA unless otherwise noted.