Heavy Turrets are large, heavy automated mounted sentry weapons often found in urban areas within Titanfall. They can be found scattered atop rooftops used for defense, targeting enemy Titans or Pilots. Turrets can be hacked via a control panel at the base of the Turret. Hacked turrets will grant XP for every pilot killed to the Pilot that hacked it. Damaging the turret also grants time off a Titan Build. It's recommended to use Anti-Titan or Titan weaponry against them.

Heavy Turrets sport four armour-piercing miniguns, as well as the ability to 'fold up' when not in use, allowing for additional protection against surprise attack. They are primarily used for anti-air and anti-Titan defence, though they also have limited anti-infantry capability. In addition, Heavy Turrets have been seen used on a variety of installations both ground and ship-based including Fracture, Smuggler's Cove, Demeter, Outpost 207, Nexus, Training Ground, Airbase and the Boneyard alongside the outer hulls of IMS Colossus and IMC Battleships such as IMS Malta.

Heavy Turrets can also be deployed on a piece of equipment known as a 'Spider Mount', a structure that allows deployment in uneven terrain without loss of stability.

To hack a turret, run up to the console (located next to the turret) and hold the use button (E by default on the PC,

on the consoles) and within a few seconds, it will activate to your team.

When a turret is destroyed, it will shut down and turn neutral. You can reactivate it in the same way as you hack it. Finally, you can hack an enemy turret without destroying it; by hacking the console completely will convert it to your team with full health.

The Turrets are very effective against Titans, as they provide suppressing fire but they can be hacked by the enemy team if left unguarded. 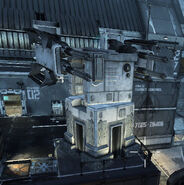