One of the major interplanetary corporations that exist within the universe of Titanfall, Hammond Robotics is a major manufacturing, aerospace and defense contractor allied with the IMC. Claiming to have been at the forefront of robot design since the 20th century, Hammond produces considerable amounts of war material for the IMC cause, including Titans, Marvins and Spectres. Their logo can be found on all Titan briefing videos. The company is also involved in the Simulacrum and energy fields.

Originally named Hammond Engineering, the company was started by Doctor Hammond over a century ago. They pioneered astronavigation techniques, materials science and many other fields of science and engineering. Eventually, the company was split into several divisions, such as Hammond Robotics alongside Hammond Armament Division, Hammond Aerospace and Hammond Industries.

Hammond Robotics remains active after the end of the Frontier War, and their recent efforts include new "planet harvesting" technology that gathers and collects energy from a planet's core. One such installation serves as a centerpiece for an arena in the Apex Games bloodsport competition. 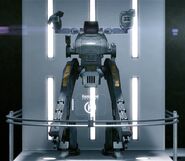 Exhibit of an early robot prototype. 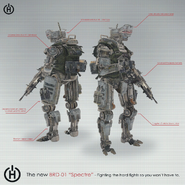 Schematics of the BRD-01 Spectre.

An Ogre made by Hammond.

The headquarters of Hammond.

Inside Hammond headquarters.
Community content is available under CC-BY-SA unless otherwise noted.
Advertisement