The Hammond P2016 is a sidearm manufactured by Lastimosa Armory that appears in Titanfall 2. It is essentially an upgraded variant of the Hammond P2011 from Titanfall. Like its predecessor, the P2016 is a Semi-Automatic Handgun with a magazine size of 12 rounds.

Unlike its predecessor, however, it can be modified in the same manner as a primary weapon, with multiple attachments and camouflage at the disposal of the user. To this end, the weapon can have an extended magazine that brings the magazine size up to 16 rounds.

The pistol can be used to execute an enemy by stealing the gun from the holster of the target, who is then gunned down with their own weapon.

A pilot violently executes another pilot with the P2016. 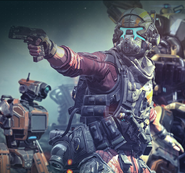