Frontier Militia (scavenged from the IMC)

The Goblin is a dropship within the Titanfall universe, that acts as an aerial transport vehicle dropping off and picking up Pilots and other IMC personnel. They are the current generation of IMC troop and light cargo transport, manufactured in a variety of formats, each with different drive, shielding, and weapon systems.[1] These dropships are able to fly in space and in the atmosphere of other planets, allowing an ease of access throughout the universe. They are also outfitted with jump drives, to minimize the amount of time spent in hostile airspace.

At the beginning of a match, player Pilots jump out of a dropship after being directed by a Spectre or their faction leader. At the end of the match, the dropship plays a vital role in the campaign mission Epilogues. The losing team has to retreat to a dropship, while the winning team has to prevent them from doing so and destroy the dropship.

The Goblin Dropship is exclusive to IMC forces, and aesthetically different from its Militia counterpart, the Crow. Differences include the color scheme being the IMC's white and black, the overall shape of the ship is more angular and blocky than the Crow and there is no fin between the two tail pylons.

The Goblin is used by IMC forces in all game modes, primarily for deploying Pilots, Grunts, and Spectres. Rather than attempting to touch down in tight confines, the passengers can instead simply jump down (in the case of close-by rooftops or Spectres) or deploy via ziplines.

In Frontier Defense, Goblins always drop four Grunts, Spectres, or Suicide Spectres; Grunts will deploy via ziplines, but Spectres will simply leap down. Goblins can be destroyed with three bursts from the 40mm Cannon in burst mode (9 shots total, meaning a Goblin has ~8,000 health) and are worth 100 points.

As of Titanfall 2, the Militia-employed mercenaries will still drop from a crow dropship for insertion and exfiltration while the IMC's mercs will drop from a Goblin for insertion and exfiltration operations, Goblin dropships (As well as their counterparts) now have much weaker shielding systems, and can be easily destroyed by as few as one Titan without Nuclear Ejection.

A Goblin Dropship Parked at Airbase. 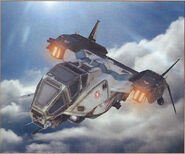 Titanfall 2 render for the Goblin's cockpit

Titanfall 2 render for the Goblin's cockpit