The G7 Scout is a semi-automatic battle rifle developed by Lastimosa Armory and employed by Apex Games combatants in Apex Legends. It is functionally a successor to its Frontier War ancestors, the G2A4 and the G2A5. As of Escape, it is a Care Package Weapon much like the Alternator, Kraber, and Spitfire. This means it cannot be found on the ground, and can only be found via Care Packages that will drop in the midst of a match. Likewise, it also will come with a limited amount of reserve ammo that is unobtainable on the ground, and once all of the ammo is used up, it should be discarded.

The G7 Scout is a semi-auto assault rifle that deals good headshot damage and it has high accuracy and great range. It performs best when coupled with a CQB option like an SMG, shotgun or AR to cover its close range weaknesses.

As of Escape, the following attachments are maxxed out and built into the scout 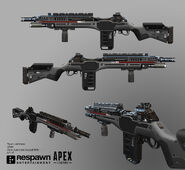