The G2A5 is a semiautomatic battle rifle manufactured by Lastimosa Armory that makes its debut in Titanfall 2, and the successor to the G2A4 Battle Rifle. It is a Pilot primary weapon with perfect accuracy and damage and a 14 round magazine capacity. Due to its simple design and reliability, it is highly sought after in remote Frontier outposts, as replacement parts can be easily fitted and printed.[1]

The G2A5 chambers a hefty 6.19x97mm round, and boasts extremely high damage against infantry targets as a result. Its high damage, in comparison with its match trigger makes the gun formidable from any range - the only limit on rate of fire is how fast the user can pull the trigger.

However, the major fault with the G2 is its hip-fire accuracy; its large reticule means the G2 rifle cannot keep up with close range guns like the Mastiff, EVA or submachine guns. Nonetheless, it is one of the most effective tools in the Titanfall 2 armory, and a dominating presence on the battlefield.

The Crack Shot banner can be unlocked by using the G2A5.

The G2A5 in first-person.

A Holo Pilot wielding a G2A5

Renders of the G2A5 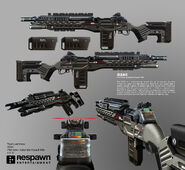