The G2A4 Rifle is a Pilot anti-personnel semi-automatic battle rifle manufactured by Lastimosa Armory that appears in Titanfall. It has since been succeeded by the G2A5 Battle Rifle, as of Titanfall 2.

The G2A4 is a semi-automatic battle rifle, chambering the hefty 6.19x97mm LEC cartridge. The IMC eventually phased out the G2A4 and replaced it with the R101-C Assault rifle,[1] though it still remains in service amongst special forces units due to its reliability and precision.[2]

The G2A4 is a semi-automatic high damage battle rifle used by Pilots. Capable of downing Pilots in 3 body shots or 2 head shots at any range, it is an incredibly consistent weapon. Fulfilling a specific niche between the assault rifles and sniper rifles, it has the ability to remain competitive at mid ranges against assault rifles, while still being able to take on sniper rifles at range. Close range combat should be avoided due to the G2A4's slow rate of fire. Trigger discipline is needed with this weapon against distant and/or highly mobile targets, as it has enough recoil to slightly offset your aim.

The G2A4 in First person.

The Iron Sights of the G2A4 Rifle. 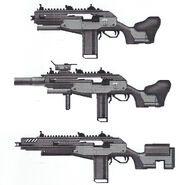 Concept Art
Add a photo to this gallery

Retrieved from "https://titanfall.fandom.com/wiki/G2A4_Battle_Rifle?oldid=40940"
Community content is available under CC-BY-SA unless otherwise noted.