FS-1041 is a Vanguard-Class Titan encountered in Titanfall 2.

FS-1041 is first encountered in the final section of The Pilot's Gauntlet. He is the simulated Titan called in by Jack Cooper moments before a loss of power aboard the MCS James MacAllan lead to the simulator cutting out, and Jack unable to pilot the Titan.

Later, after Jack's interrogation at the hands of Kuben Blisk and the extraction of the SERE Kit housing the datacore of BT-7274, FS-1041 would be the final Vanguard-class left in the racks of the 9th Militia Fleet. FS would be dropped into the fight sporting a Legion loadout (Including a Predator Cannon), but without his native datacore. The FS-1041 chassis would have the AI of BT-7274 placed into it, allowing Pilot and Titan to fight together once more.

After defeating the Apex Predator mercenary Slone, FS (Under BT's control) would be sacrificed to destroy the Fold Weapon. The fate of FS-1041's AI is unknown. 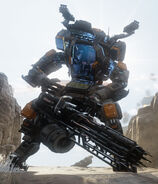 FS-1041 with a Predator Cannon

FS-1041 in the achievement art for the Titanfall! achievement
Community content is available under CC-BY-SA unless otherwise noted.
Advertisement