The EVA-8 is a pump-action/automatic shotgun designed for extra-vehicular activity and to operate in zero gravity environments. The weapon was developed from the ground up by Wonyeon Interstellar to provide the IMC Orbital Guard Raiding Parties (aka Shipwreckers) with devastating CQB firepower. The EVA-8 has also been widely used by the Frontier Militia and Badlands Pirates, often acquiring the weapons by raiding remote supply convoys to the Outer Colonies. When in need of massive firepower during first contact, Pilots look no further than the EVA-8.[1]

The EVA-8 Shotgun is a Pilot anti-personnel auto-loading shotgun that appears in Titanfall.

Despite having a restricted fire rate, the EVA-8 is easily capable of obtaining one hit kills on both Grunts and Pilots. Although the EVA-8 has a decent range for a shotgun, its low rate of fire can make follow-up shots slow, meaning it is advised to aim for one-hit kills when possible. It has an average reload speed.

The EVA-8 fires 8 pellets, however the visual effect shows 11 pellets.

Reaching any tier of any EVA-8 challenge will award an Amped EVA-8 Burn Card and some XP.

The EVA-8, now rebranded the EVA-8 Auto,reappears in Titanfall 2.[2] Unlike it's Titanfall predecessor, it is now fully automatic, and will continuously fire as long as the trigger is held down - similar to the Amped EVA-8. IT is unlocked at Level 8 (or can be bought for 100 Credits). Getting the EVA-8 Auto to Generation 2.9 will unlock the Worse For Wear Banner (with 3.9 and 4.9 unlocking the FIRE and GOLD variants, respectively) while getting the weapon to level 20 will unlock the Ask Again Later Patch.

The EVA-8 makes its appearance once again in Apex Legends. It is the fastest firing shotgun, and its higher firerate compensates for the lack of range, as well as lower damage compared to the Peacekeeper which has the capability of two-shotting opponents. Unlike its predecessors, the firerate can be modified with attachments.

First-Person view of the EVA-8

An IMC grunt is executed with the EVA-8 shotgun. Note the heavy recoil of the shotgun.

First-person view of the shotgun in Titanfall 2 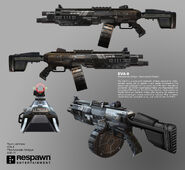 Concept art for the weapon in Titanfall 2