Demeter is a multiplayer map featured in Titanfall. Its setting takes place on the namesake planet, Demeter. It is a critical fueling station for IMC forces making the jump into the Frontier.

Demeter is a critical fueling station for IMC forces making the jump into the Frontier. The station is full of pipes, maintenance shafts, bridges, and other unique features that allow Pilots great freedom of movement. Pilots frequently use the bridge between Hardpoints B and C to stay in control of the two stations in Hardpoint operations. Demeter’s sky is dominated by a dying red giant star. Combatants can use this to their advantage, orienting themselves in such a way that their attackers’ vision is obscured by the sun’s brilliant red glow.[1] 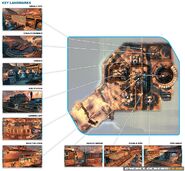